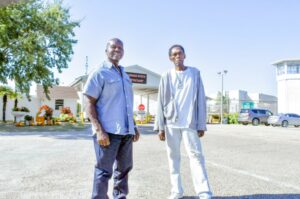 In 1964, Lester Pearson, accused of murder in Louisiana, signed a plea agreement giving him a shot at parole after 10 years and six months, but it never happened.

By the time Pearson walked out of the Louisiana State Penitentiary (Angola) he served more than five and a half decades in prison. Pearson told PBSNewsHour that the plea agreement was the best option at the time for a Black man in the Jim Crow South. However, after Pearson served his 10/6 he wasn’t released and it seemed no one cared.

Pearson is part of a group of about sixty 10/6 lifers in Angola who pled guilty to crimes with the understanding they’d be released after 10 years and six months. However many are being released more than 40 years after their parole date. Today, all 10/6 lifers are between the ages of 66 and 86 and many are just now being released, including Pearson who was one of five 10/6 lifers released in October after serving 57 years.

“No one ever told me nothing,” Pearson told PBS. “I always thought that I’d die in prison. I’ve seen so many people die. “I’m not mad about it, I’m disgusted. I did way more than my time. I’m not the same person.”

Pearson and the other 10/6 lifers were released wit the help of the Louisiana Parole Project (LPP), a nonprofit 501(c)(3) organization that was created to give juvenile lifers in the state a meaningful opportunity for release based on their rehabilitation.

The LPP is now leading the “Forgotten Man Project” to free inmates who have served extreme sentences. The project gives a special consideration to Black prisoners who were incarcerated in the state. According to Andrew Hundley, the executive director of the LPP, said the 80% of 10/6 lifers and 73%  of all prisoners in Louisiana are Black men and women

LPP attorney Jane Hogan said after the men were offered the deal, the door was slammed on the men and they were left to be forgotten.

“Back then, it was an overwhelmingly enticing offer [to avoid execution]. I think that our clients accepted that offer and then to have that promise broken; it is a real travesty of justice,” Jane Hogan, an attorney with the Louisiana Parole Project told PBS. “The goal post shifted and the door was slammed on these men. They were essentially forgotten, and efforts at having the deal honored were basically ignored.”

The 10/6 sentencing guidelines were established in 1926 by state lawmakers and ran for 46 years. However, as state laws stiffened, the men who agreed to 10/6 deals were left in prison past their agreements and the state repeatedly raised its parole requirements and by 1979, parole was non-existent.

Another eight cases are expected to be resolved by the end of the year. Last month, Nola.com reported Gov. John Bel Edwards (D) granted clemency last month to Gloria Williams, 76, the state’s longest-serving female inmate. Williams was convicted of murder in 1971 and is considered a 10/6 lifer. Williams, who is Black, still faces a parole hearing in December.