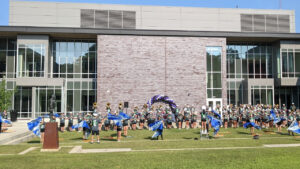 After facing several incidents of racism at a Michigan high school that have gone unchecked, a student and her parents have filed a lawsuit against the school alleging racial discrimination.

According to CBS Detroit, a high school student and her parents have filed a $150 million lawsuit against the Bloomfield Hills School District in Detroit, Michigan. The suit was filed after multiple encounters of alleged racial discrimination and allegations of death threats went unaddressed.

Although the 15-year-old student isn’t named in the lawsuit, last Thursday, her parents, Cedric McCarrall and Carmen Davidson–McCarrall filed the federal class-action lawsuit against the Bloomfield Hills School District. Superintendent Patrick Watson and high school principal Charlie Hollerith are also named for failing to address multiple occurrences of alleged racial discrimination. The lawsuit was filed on behalf of the parents and “all those similarly situated.”

The suit additionally alleges that school officials at the high school said a white teacher’s decision to place a noose around the neck of a Black doll and drop it over a railing was labeled a science project.

The lawsuit, which is looking to become class-action status, comes after a walkout last week by students at the predominantly white school located north of Detroit. The protest was in response to racist messages that were left on walls and on social media.

“You cannot take what has been displayed at that school … as anything other than death threats, and these are threats to kill and eliminate African Americans,” said Leonard Mungo, the attorney who filed the lawsuit on behalf of the McCarralls.

Click on Detroit reported that the parents also want the U.S. Department of Justice to send federal Marshals to patrol the schools to prevent more disturbances from taking place. Bloomfield Hills police claim that they are investigating the incidents.

“How can you study, how can you take tests, how can you go about your day as a child, as a student when you have someone up there saying they want you dead?” Cedric McCarrall said Friday. “When I close my eyes I’m hearing what my parents and what my grandparents went through in the Jim Crow South.”