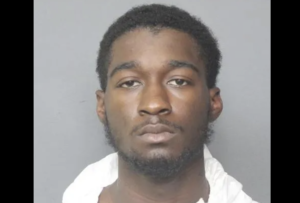 A 19-year-old Virginia man has been arrested and now faces three counts of second-degree murder and malicious wounding and four counts of the use of a firearm in the commission of a felony after he shot and killed three women and wounded two other women on Wednesday evening.

According to witnesses, Palmer reportedly shot his 19-year-old girlfriend in the shoulder as they exited a car at around 6 p.m. in the Young Terrace neighborhood of Norfolk. Lovewine, the young woman’s mom, and Brown (the mother’s friend) were shot and killed as they attempted to help the victim. Costine, a neighbor who lived across from them, tried to aid the women and was gunned down also.

“The young lady was in the back, and the gentleman shot her, and then he approached the mom and her girlfriend and shot them and then two neighbors who tried to help he shot them too,” the neighbor said.

Another neighbor detailed trying to help.

“I helped one girl right here. She was bleeding to death. I told her, ‘Don’t move, stay still, paramedics are coming.’ I had a towel trying to help her,” the unidentified person said.

According to News 13, Norfolk Police Chief Larry Boone said the “mass shooting” was one of the most shocking scenes he had ever witnessed.

“We need to start speaking up because this, I’ve never seen this in my 30 years career– five women shot at one time,” he said. “As the community was trying to render aid, this coward shoots them.”

Neighbors created a shrine for the women at the site of the shooting.

Shashina Perry, who lives close to the area, expressed her sadness to the news outlet.

“A lot of us felt helpless,” Perry said. “We saw the lifeless bodies. We saw the women not moving. I saw a 7-year-old kneel before his mother and say, “Mommy, please get up.”

The woman detailed that even children were running to help the deceased women.

Shashina Perry lives down the street from where the shooting took place.

She says she heard several gunshots.

She also saw children running towards the women shot trying to help them. pic.twitter.com/6NrSJOxC8X

“A lot of us felt helpless,” Perry said. “We saw the lifeless bodies. We saw the women not moving. I saw a 7-year-old kneel before his mother and say, “Mommy, please get up.”

“Mothers, women, babies left without mothers,” she said. “This is not the stock we come from.”