When Microsoft and 343 Industries revealed the first-ever Halo Infinite campaign gameplay last year, it was met with a lot of criticism, and Craig the Brute was at the center of it all.

Craig, at the time, was just a standard brute. The poor guy showed up to work that day thinking he’d just be standing around, guarding an outpost, just like every day before. Craig was earning money to put food on the table for his family, and then one fateful day, Spartan 117, aka Master Chief, came knocking, and the brute had to get absolutely wrecked by him. As if that’s not a tough enough workday, Craig became the central point of criticism regarding that gameplay showcase: people thought he didn’t look great. 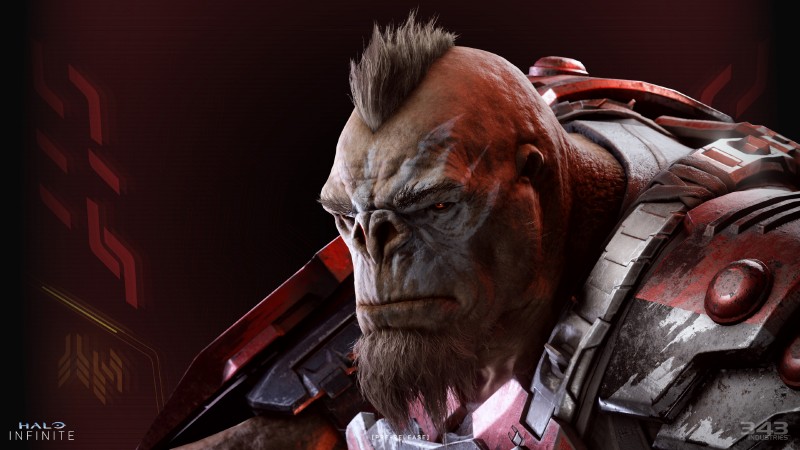 As you can see in the screenshot above, Craig is looking great. He ditched the shaved head look in favor of a lil mini mohawk, and he even grew out a goatee. As indicated by his new face paint and armor, Craig’s received a promotion too – as he should have after seemingly surviving a fight against Master Chief. Look, are we still going to absolutely wreck Craig’s entire day when Halo Infinite comes out on December 8? Yes, but that doesn’t mean we can’t be happy for Craig and his glow-up.

The latest Inside Infinite blog post released today features an entire section dedicated to this glow-up, too, and it turns out 343 Industries has a love-hate relationship with Craig.

“The team has a sort of love-hate relationship with Craig,” Halo Infinite character and combat director Steve Dyck says in the blog post when asked about Craig. “While it was fun to see the community gravitate towards Craig, he unfortunately represented some content and systems that were not ready for prime time in that demo. The positive outcome of Craig was that he was one of the factors in gaining some more time to finish work and get Brutes to a place where the team is happy with them.”

To coincide with this Halo Infinite update, Xbox made a tweet to help ring in Craig’s new look, and it’s a very good one:

What do you think of Craig the Brute’s glow-up? Let us know in the comments below!