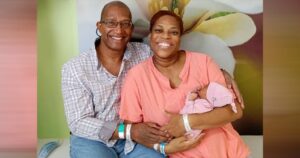 Susie Troxler, a 50-year old woman from Greensboro, North Carolina, recently gave birth to a baby for the first time. She and her 61-year old husband Tony are very excited about being parents to their miracle baby.

Since the couple got married in 2008, they have always dreamed of having their own baby. But years have passed and Susie still didn’t get pregnant. They tried consulting doctors but they were always told that it could not happen.

Aside from their age, Susie had uterine fibroids and Tony had some medical issues that lowered their chances to have a baby in a natural way.

That is when they tried other procedures like IVF and egg donation. Cone Health OBGYN Dr. Carolyn Harraway-Smith referred them to Carolinas Fertility Institute where Susie’s fibroids were removed before performing rounds of egg collections and IVF.

“None of that worked, and we were down to our last embryo,” Susie Troxler told WFMY News about their experience. “They bring me into the ultrasound, and the first thing they said was, ‘Oh, she’s moving!’ I was like, ‘Yes!’”

“We are thrilled. Sleep-deprived, but totally beyond worth it. She is a miracle baby,” Susie said.

Meanwhile, even though giving birth at the age of 50 is extremely rare, Harraway-Smith said it is not always recommended as it involves several risks such as miscarriage, stillbirth, among others.