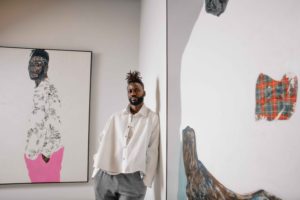 Ghanaian painter Amoako Boafo is proving that his priceless masterpieces not only belong in a gallery but also in the great beyond.

To help a new art program blast off, Uplift Aerospace will employ Boafo’s stellar painting talents to supply art for the Origin New Shepard rocket’s outer panels, according to The Art Newspaper. The rocket’s mission is scheduled for the fall. It will bear Boafo’s work, entitled the “Suborbital Triptych”.

“I am drawn to the idea of my works going into a new orbit, literally,” Boafo told The Art Newspaper. “This will further push my vision for my practice. I am honored to be one of the first Black men to have my work sent to space. I’m very excited to be a part of this from a historical standpoint.”

Uplift Aerospace is honored to announce award-winning artist @AmoakoBoafo is painting the historic artwork traveling to space and back on a Blue Origin New Shepard rocket this fall.@MARIANEIBRAHIMG @blueorigin https://t.co/tHfhi4uWlQ

But first, Boafo will head to Texas to create his distinctive masterpiece.

Don’t be misled. Boafo is already poised to embrace this elite opportunity. His work has already been recognized as being top-notch.

The creative guru blends finger- and hand- produced painting with strokes of a brush to capture moods of people who artistically move him. Some of the artist’s portraits were snagged for over $1 million through the highly-acclaimed Christie’s auction house, Space.com reported.

Josh Hanes, CEO of Uplift Aerospace, explained that the Uplift Art Program is intended to become a conversation starter and spark new concepts.

“Artists have a unique capacity to evoke fresh perspectives and interpret unfamiliar terrain. The profound strength of Amoako’s portraits for the first “Suborbital Triptych” will bring another dimension to the power that propels the New Shepard rocket,” Hanes said in a press release.

Boafo is known for doing that very thing.