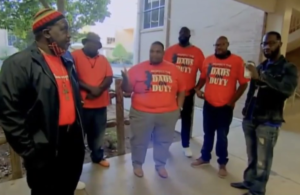 A group of Black Louisiana fathers has vowed to bring back the peace to a Shreveport high school.

According to CBS News, Michael R. La’Fitte II founded Dads on Duty at Southwood High School after the institution was plagued with violent altercations daily. Before Dads on Duty’s creation, 23 pupils were arrested for brawling inside the school over three days. The crew is made up of 40 dads who now patrol the halls of the school in shifts.

DADS ON DUTY: After a violent week of fighting at a Louisiana high school, parents knew something had to change. So, a group of dads decided to show up not just for their kids – but for the whole student body – to help maintain a positive environment. @SteveHartmanCBS has more. pic.twitter.com/Uux3qx48sd

Since the patrol’s inception, the school hasn’t had any other incidences of violence.

“We’re dads. We decided the best people who can take care of our kids are who? Are us,” LaFitte told CBS News’ Steve Hartman.

“I immediately felt a form of safety,” an unidentified Southwood student opened up about the changes at the school since the arrival of the dedicated dads.

Although La’Fitte maintains that he knows Dads on Duty has brought order back to the school, he isn’t trying to be the cops or security.

Southwood students like having the dads around, according to CBS News. Not only do the fathers keep the peace– they offer the kids comic relief with corny dad jokes.

“They just make funny jokes like, ‘Oh, hey, your shoe is untied,’ but it’s really not untied,” a student said.

“They hate it! They’re so embarrassed by it.” La’Fitte added.

La’Fitte and his crew plan to expand Dads on Duty into other chapters throughout Louisiana.

“Because not everybody has a father figure at home – or a male, period, in their life. So just to be here makes a big difference,” one of the dads told CBS News.

The news outlet also reported that the father is the president of Shreveport’s NAACP chapter.