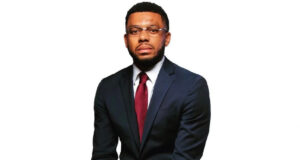 Howard University is known for the many prominent and prestigious alumni. The latest making his mark is Lawrence Blackmon, a civil rights attorney.

A troubling encounter he experienced while attending the D.C. institution, paved his path to his greatness:  Blackmon’s mind was set to take up causes close to his heart and to pursue justice.

Blackmon says he and other students were “violated” by a white FBI agent who claimed that based on the footwear one of them was wearing, one of the students “matched the description” of a suspect who had robbed a jewelry store earlier that day. A typical trope when police racially profile Black people sparked Blackmon’s interest in activism and ultimately his career as a civil rights attorney.

After obtaining his undergraduate degree at Howard, Blackmon attended Mississippi College School of Law, where he earned his Doctor of Jurisprudence degree (JD), then a Masters of Law (LLM) from George Washington University. Blackmon became a practicing attorney who represents clients in civil rights and personal injury cases. Licensed in Mississippi and Georgia with offices in Canton, MI, and Atlanta, he began his career with the family business, Blackmon and Blackmon, before overseeing his private practice.

Blackmon took time to talk with BLACK ENTERPRISE about an upcoming case he is working on with another powerful civil rights attorney, Benjamin Crump. He also shared why he decided to pursue law and his future plans.

BLACK ENTERPRISE: As an attorney, what difficulties have you had to face in order to start your own firm and how has that helped you thrive in your practice?

Lawrence Blackmon: I come from a family of very successful attorneys, so I didn’t start from the bottom per se. But every attorney has to build their own reputation for results. In this business, results take focus, long hours, and hard work. Rising to the occasion and getting the best possible results for my clients can be challenging, but it’s a challenge that I welcome every single day. Never losing sight of this passion fuels the thrive to succeed, the humbling reminder that I’m a servant leader, and the hunger that shows in every case.

Why did you choose to have your law practice in the civil rights realm?

During my sophomore year at Howard University, a group of friends and I were out on a weekday afternoon in Georgetown. As we crossed a busy intersection, we noticed a white man in plain clothes walking toward us holding a small handgun near his waistline. He was pointing the gun at us and kind of angled us off from the crowd to the side of a building. I thought to myself, “Oh snap, we’re being robbed,” but the man told us to put our hands up and that he was an FBI agent. He questioned us. He called officers and the officers came.

They ran our names through the system. We were told that the reason for the violation was that the sneakers that one of my friends was wearing—black and white Ken Griffeys—matched the description of the sneakers that a suspect was wearing in a jewelry store robbery earlier that day. We felt violated. We were violated. And we didn’t know who to call. I knew before then that I would be an attorney, but I decided then that I would be the type of attorney that could be called upon when people are violated, especially by the government.

You’ve recently partnered with attorney Ben Crump on a case against the United States Marshal Service for an incident involving a Black person being brutalized and it being captured on video. What’s your expectation with this matter?

First, let me express that I am very honored to be working alongside a civil rights champion like attorney Ben Crump. I have long admired him and his work for our community. In this and every case, I expect justice to be served, and for my clients to be made whole for this totally unjustifiable violation of their civil rights. The physical wounds will heal, but the mental trauma can last for a very long while, even a lifetime. They deserve to be adequately compensated for that.

What would you tell someone who is passionate about succeeding in the law profession and wants to have their own practice?

There are many people and many causes that are in need of tough, smart, and courageous representation. If you are going to be a lawyer, be tough, be smart, be courageous, and do it for the people and causes that need you. If you do that ,the money will follow.

What does the future look like for Lawrence Blackmon and the Blackmon Firm?

We are expanding and looking to open several new offices, in Alabama and Georgia, in the coming year. We will continue to offer first-class service and results to our clients and our community.