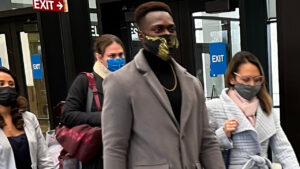 With the trial of Empire actor Jussie Smollett coming to a conclusion with a guilty verdict against the actor, one of the men who testified for the prosection and alleged “attacker” is busy winning boxing matches.

According to TMZ, last week former hang-out partner of Smollett and sometime actor Abimbola “Bola” Osundairo won a boxing match on the same day that the former Empire actor was found guilty of five counts of disorderly conduct for making false crime reports to Chicago police, saying he was a hate crime victim in 2019.

Last Thursday, Osundairo represented Team USA during the 2021 USA Boxing National Championships in Shreveport, Louisiana. He emerged victorious on the boxing judges’ scorecards as he was voted the unanimous winner in his match against his opponent Ezri Turner.

Another win for Bola Osundairo last night in Shreveport, beating Ezri Turner of Delaware in a 5-0 decision shortly after his former friend, Jussie Smollett, was convicted in Chicago. pic.twitter.com/wQ6BUQyhcN

According to The Shadow League, Osundairo has only been fighting for over a year. As a light-heavyweight boxer, he has compiled an amateur record of 5-3. The fighter has also represented Chicago at the USA National Boxing Championships earlier this year in April.

He had reportedly won Chicago’s Golden Gloves boxing competition which took place at Cicero Stadium. He gained a victory by technical knockout in the first round while winning the senior novice division at the 178-pound limit. Osundairo fought in the 21-to-35 fighters with less in-ring experience bracket.

Smollett, who was found guilty of staging a physical attack against himself in January 2019, Smollett told police officers he was assaulted by two masked men who yelled racial epithets and homophobic slurs at him before placing a noose around his neck and pouring liquid on him.

Skeptical of his version of the incident, prosecutors had charged Smollett with six counts of disorderly conduct and accused him of lying to the police officers about the incident. They believe the actor paid  Abimbola “Bola” Osundairo and his brother, Olabinjo $3,500 to stage the attack, which Smollett had always refuted.

The Shovler App Will Help You Make Money Shoveling Snow

Cookbooks To Take Your Holiday Meals From Bland To Bussin'!