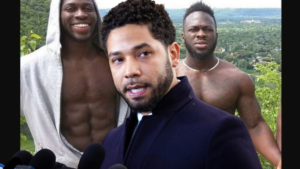 Former Empire actor Jussie Smollett testified in his defense Monday saying that he and his accuser spent drug-fueled nights together at a gay bathhouse.

Smollett, 39, testified that he and Abel Osundairo met at a nightclub in the fall of 2017 and shared cocaine together. The actor also said he and Osundario also went to Steamworks Bathhouse in Chicago and where the pair continued to do drugs and make out with each other.

“We were in a club, you go to the bathroom, go to a stall, do a bump, do a bump and then just kind of keep going in and then we went to the bathhouse,” Smollett said on the stand according to the NY Post. “We did more drugs and made out.”

Smollett added there was “touching and things like that” but the pair didn’t get sexual until their next trip to the bathhouse.

“We went alone this time. We got a private room again, we did drugs and made out a little bit and this time, we masturbated together,” Smollett said.

Smollett testified that he met Osundairo’s brother Ola at a strip club earlier on the second night of their bathhouse visit. Prosecutors then asked Smollett if the brother, Ola knew about Smollett and Osundairo’s club activities, the actor said  “The assumption was, of course he didn’t because we had to sneak out.”

Last week, Osundairo testified about his own acting career working as an extra and how he met Smollett while appearing frequently on the show Empire. Osundairo added Smollett and the two brothers had a discussion of who would punch the actor.

Prosecutors have charged Smollett with six counts of disorderly conduct and is accused of lying to police about the 2019 incident alleging he paid the brothers $3,500 to stage the attack. Smollett has denied paying the two men.

Smollett, who is openly gay, told police he was attacked by two masked men who yelled racial and homophobic slurs in January 2019. The Empire actor said the men put a noose around his neck and poured a chemical on him.

However, the brothers eventually told police that Smollett coordinated the attack and provided the money for them to buy ski masks, rope and red hats to appear to be Donald Trump supporters.