Lisbon-based Pedra Silva Arquitectos has teamed up with Spanish design studio Astet to convert a former clifftop farmstead on Portugal‘s west coast into a destination for surfers.

Aethos Ericeira is a 50-room hotel positioned high up on sandstone cliffs, overlooking the beach on a stretch of coastline known to offer some of the best waves in Portugal.

Pedra Silva Arquitectos oversaw the building work, which included reworking the facades, while Astet replanned the spatial flow and designed the visual aesthetic of the interiors.

Their design draws from its setting, combining references to the rural landscape with elements of surf culture, and also taking advantage of the elevated view.

Grand windows, simple furnishings and an earthy colour palette help to create an environment where visitors can feel relaxed and connected with the setting.

“When we came across the property, we immediately knew it was a unique opportunity – a secluded destination on top of a 40-metre cliff, surrounded by lush fields with unrivalled ocean views,” said CEO and co-founder Benjamin Habbel.

“The building, a former farmhouse turned into a rehab centre, had been abandoned for many years,” he told Dezeen. “Despite its bad shape, we saw huge potential.”

The venue is one of five properties under the Aethos brand, along with locations in France and Italy.

Like its sister venues, the ethos behind Aethos Ericeira is to promote mindfulness among guests, by offering wellbeing-focused spaces and experiences.

For Pedra Silva Arquitectos, this meant bringing a greater sense of cohesion to the existing buildings and the various extensions that had been added over the years.

The old farmhouse was kept simple, with light-rendered walls, a clay tile roof, arched recesses and protruding box windows. Meanwhile other parts of the building were updated with timber slats and metal panelling. 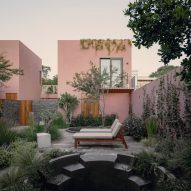 “We felt the solution was to establish a clear distinction between old and new, restoring the existing building to something closer to its original state, and giving recent extensions and new construction their own distinct character,” said studio founder Luís Pedra Silva.

“For the areas of more recent expansion, the challenge was to achieve a contemporary look and feel that was well integrated,” added architect Bernardo Nadais.

“We achieved this by combining a strong materiality with surgical instances of demolition – removing some sloped roofs, opening up the balconies – allowing us to reinterpret the facades into clearer shapes and volumes.”

The materials palette incorporates warm natural materials like wood, velvet and rattan, but also brings in cooler surfaces that include marble and stone.

“Ericeira can be great and sunny but there are a few months where it’s windy and rainy, so the number one goal was for rooms and common spaces to function in the summer and be cosy in the winter,” said Astet’s Ala Zureikat.

“Yet we didn’t want to be too literal and use Portuguese tiles, because I think that’s the first thing that everyone associates with Portugal,” he told Dezeen. “We wanted to achieve a more sophisticated twist.”

The most distinctive space is the hotel reception, which is characterised by the original arched windows, soft-green tiles and large louvre screens.

The bedrooms are more minimal, with custom headboards, muted fabrics and wooden flooring.

“The door of the room is a full-size mirror, so wherever you are, you always have a view of the ocean,” said Zureikat.

Aethos Ericeira facilities include a restaurant, a gym, a heated saltwater pool, a meditation and yoga deck, and a spa with hammam, hot slab and treatment rooms.

Landscape works help to create easy flow between these spaces, and link up with pathways leading to the beach.

Other recent beach hotels to open include Ethos Vegan Suites in Santorini, Villa W in Saint-Tropez, and Patina Maldives.

The photography is by Francisco Nogueira and PION Studio.