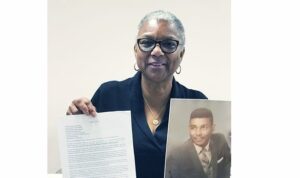 Carol Greenlee, the daughter of one of the Groveland Four, couldn’t hold back tears when a Florida judge exonerated the convicted men in a 1949 rape.

The families of the four men have been fighting for decades to get their names cleared. Greenlee, the daughter of Charles Greenlee, who was sentenced to life, said her father’s exoneration had cleared a dark cloud that had been following her for 72 years.

“All my life, I’ve been waiting to hear those words: ‘Restore presumption of innocence,’” she told reporters after the announcement.

“Even a casual review of the record reveals that these four men were deprived of the fundamental due process rights that are afforded to all Americans,” Gladson wrote in the motion heard in court Monday morning, according to ABC News. “The evidence strongly suggests that a sheriff, a judge, and prosecutor all but guaranteed guilty verdicts in this case.”

Following the hearing, Gladson addressed reporters with the family members of the Groveland Four. Greenlee, 72, who was born a few months before her father was wrongfully imprisoned, was the first to speak and thanked everyone who helped her in the fight to clear her father and his friends names.

“This is a day that God has made,” she told reporters as she wiped away tears of joy.

Charles Greenlee was 16 when he was sentenced to life in prison due to a recommendation of mercy from the jury in the case. He didn’t appeal the conviction, but was released in 1960 and passed away in 2012. Greenlee told ABC she visited her dad until she was three when her father asked her mom not to bring her to visit him anymore because it was too hard.

While in prison, the wrongfully accused man continued to send letters and other gifts to his daughter. Carol Greenlee said it took years to understand the story of the Groveland Four, and she felt like her dad rejected her when he said she didn’t want her to visit him anymore. It wasn’t until the age of 40 when she finally asked him what happened.

Irvin was retried, convicted, and sentenced to death again, but the sentence was later commuted to life in prison. Thomas fled in July 1949, but was shot more than 400 times by a sheriff’s posse that caught up with him.