Co-founder and chief creative officer of Salt Hotels Kevin O’Shea explains how the group transformed an abandoned brick manufacturing facility into a luxury hotel and event space in this video.

Named Hutton Brickyards, the hotel is located in Kingston, New York, on the Hudson River. The resort also functions as a large-scale event space and was named winner of the Event Spaces category at the AHEAD Americas awards 2021.

The AHEAD Awards celebrate striking hospitality projects from across the world and is split into four different regions: Europe, Middle East and Africa, Asia and the Americas.

Hutton Brickyards’ site was originally used as a brick manufacturing factory from the late 1800s onwards but eventually fell into disrepair.

O’Shea told Dezeen how owner and developer Karl Slovin worked to preserve and renovate the existing structures during a seven-year restoration process.

“The vision behind Hutton Brickyards first and foremost was about saving this incredible manufacturing facility,” said O’Shea.

O’Shea added that the team wanted to embrace the history and decay of the site, rather than covering it up.

“People get to experience this really incredible historic piece of architecture as part of their experience at Hutton,” he said.

Several of the original structures have been transformed into open-air pavilions used for hosting events. 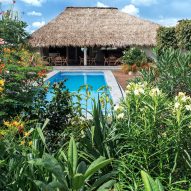 AHEAD awards announces shortlist of best new hotels in the Americas

Much of the resort is designed to be open-air and in close proximity to the surrounding environment. Guests can take part in a range of outdoor activities such as biking, kayaking and hiking.

Allowing guests to escape into nature was at the forefront of designing Hutton, O’Shea explained.

“The atmosphere we wanted to create here was you can go out into nature, you can get two hours out of New York City, but you don’t have to sacrifice comfort,” he said.

Guests can stay in one of 31 individual cabins spread throughout the site, with interiors informed by the minimalist Shaker aesthetic. Functional pieces are intended to highlight craftsmanship over style.

“We’ve done a lot of sourcing from local makers, we really tried to highlight that to give people a sense of place and authenticity,” said O’Shea.

“We want people to feel like they’re at home, and that you can make this space your own.”

O’Shea also discussed how the hotel design industry could find ways to work with social distancing guidelines, rather than be limited by them.

“When we got involved with the project, it was actually at the height of the pandemic,” he said. “And as we were looking at the site, it was like, this is kind of built for this post-COVID world.”

“It wasn’t intentional, but it’s been a great coincidence of how this project was developed and kind of the world that we’re living in right now.”

This video was produced by Dezeen for AHEAD as part of a partnership. Find out more about Dezeen partnership content here. Images courtesy of AHEAD. 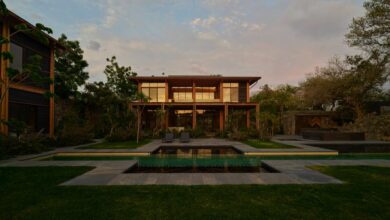 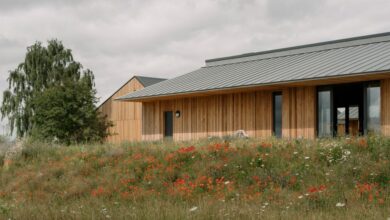 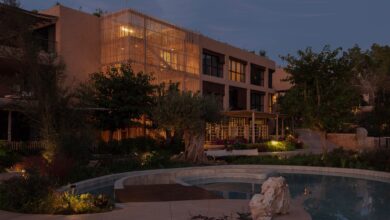 AHEAD awards winner creates hotel that draws on local environment 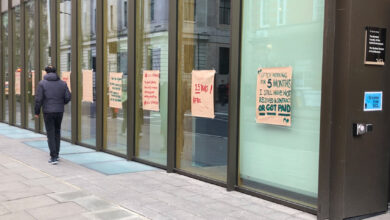