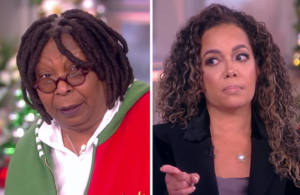 Whoopi Goldberg and Sunny Hostin typically share similar opinions while hosting The View. But Goldberg recently had to check Hostin for passing judgment on performers who lose weight singing ability.

During the Wednesday taping, a conversation started around actress Rebel Wilson’s recent revelation that producers encouraged her not to lose weight because it could result in her losing roles. The ladies shared their views on whether or not an actor’s size should dictate their careers, as noted by Decider.

But when Hostin admitted to thinking a singer’s voice can change if they lose weight, she rubbed Whoopi the wrong way.

“I do think, sometimes, when there’s a singer that loses weight, sometimes they lose their voice,” Hostin said after Sara Haines made mention of Adele.

But Whoopi was quick to shut Hostin down. “That is not true,” she said in response.

Whoopi kept on repeating, “that is not true while Hostin tried to dig herself out of the hole she fell into. Hostin tried turning to the audience for support but realized she was riding solo on the body-shaming ship.

But Whoopi wasn’t having it. She was so offended by Hostin’s assumptions about weight loss among singers she had to give her co-host a piece of her mind.

“I’m sorry! You’re going to take her word for it?” Goldberg said. “I like her too! I love that jacket.

“But you’re wrong, and let me explain why. Sometimes, people are asked to lose weight because they have nodes. They have to be able to get down there and get ahold of the nodes.”

The Sister Act star hit Hostin with some music education and explained what can cause a singer’s voice to change over time.

“People lose their voice for many reasons,” Whoopi said. “It is never, as far as I’ve been around for a hundred thousand years, maybe 10 years less than my friend Joy.”

“When opera singers lose weight, they don’t lose their ability to sing,” she continued.

But when Hostin tried to explain how the voice of “robust” singers can change when they drop in size, Whoopi threw to commercial to save her co-host further embarrassment.

“A lot of Black singers are robust,” Hostin said. “They are.”

Whoopi had it at that point and ended the heated debate.