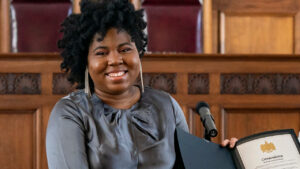 The governor of Alabama has honored the state’s first Black poet laureate in a ceremony that took place on Wednesday.

According to The Associated Press, Alabama Gov. Kay Ivey has recognized Ashley M. Jones as the state’s first Black poet laureate. Jones is a creative writing teacher who probes into the inequality and the challenges of being Black in America.

Ivey presented Jones with a commendation following her nomination and selection by the Alabama Writers Cooperative. Her term, which will be for four years, starts in January. When she begins as poet laureate, Jones will be advocating for poetry and writing during lectures and appearances at schools, libraries, and other institutions. “I am committed to making space for all of us who write,” she said.

In an interview, Jones stated, “I’m hoping that through my position I can continue to spread that message and show that when we actually confront the truth, it’s good for everyone. Hiding things doesn’t help at all. It actually hurts more than it helps,” she said.

Jones, who was once a student at the Alabama School of Fine Arts, is now going there as a teacher. She has said that her receiving an honor like this, in a deeply conservative state, was gratifying. Although it is a conservative state, she says that Alabama’s writing community, like those elsewhere, is more progressive than the general population.

“What, you think all I want is money? What, you think money can ever repay what you stole? Give me land, give me all the blood you ripped out of our backs, our veins. Give me every snapped neck and the noose you wove to hoist the body up.