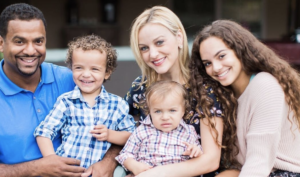 Alfonso Ribeiro, better known as Carlton Banks, Will Smith‘s corny, geeky cousin in the television sitcom “The Fresh Prince of Bel-Air” decided to talk about being ostracized by the Black community for having a white wife, except Black Twitter reminded him that he was not on top of anybody’s mind.

Ribeiro, the current host of “America’s Funniest Home Videos” spoke exclusively with Atlanta Black Star about the stigma that came with playing such a popular character on an iconic show.

But, he also said he feels that being married to a white woman places him in an uncomfortable position when he is out in public and he sees the looks he receives combined with being typecast as Carlton Banks and being in a mixed marriage, he said, makes him feel like he will never be accepted by Black people.

“Being Black isn’t something that I try to be. It’s who I am,” he said.

Ribeiro was asked about a particular scene on an episode of “The Fresh Prince of Bel-Air” when he tried to pledge to a Black fraternity where he was met with skepticism. The writer, Jasmine Alyce asked him if he’s ever encountered that feeling in real life.

“It still happens almost every day, unfortunately. I am in a mixed relationship,” Ribeiro responds. “And I get things and looks and comments constantly. And I find it very interesting because you see a lot of things on social media where people say things and people have positions and perspectives. And it’s not easy to make that choice, because you’re not at home in any home. I’m never going to be white and I’m never going to be fully supported in the Black house.

Of course, Black Twitter let loose on his reasoning, pointing out that he loves white women and the first Tweet below shows a video clip where he admittedly states it!

Maybe this is why we didn’t care about your marriage or why you haven’t been invited to BET @alfonso_ribeiropic.twitter.com/6PlId77Zk0

At least Carlton was a funny character, Alfonso Ribeiro on the other hand can be intolerable and ignorant. https://t.co/c6XwUsRYxv

Most people wouldn’t have known anything about this video had he not been making statements about how Black people don’t accept him because of his white wife. ?

I really had to step back from my phone to process this pic.twitter.com/S2P5GHtkyc

Particular classes of Yt males do not like this.

A few classes of Yt females do not, either.

I think ‘Fonso is about 2 go thru some things.

No one cared about his marriage but his wife should.
Interesting declaration here in front of a group of Yt folk. pic.twitter.com/zVQFkRAO2K

‘I’ve been with a lot of white women in my time…’ pic.twitter.com/AUlbyGkFOp

Carlton really should have sat there and said nothing. A FEW people may have said something, but MILLIONS didn’t care. Now you say something and now a video like that comes out….

The Black community clearly didn’t come for you “Carlton.” So don’t send for them.