Pale timber ribs characterise the interior of this white-brick extension, which local studio Amos Goldreich Architecture has added to the rear of a north London home.

Named Framework House, the asymmetrical extension to the semi-detached home was designed to replace a dated conservatory.

It also opened up an existing gloomy kitchen space described by Amos Goldreich Architecture as “like walking into a cupboard”.

“The owners wanted to update the property in a way that would maximise the available space and reconnect different areas while leaving them clearly defined,” explained the studio.

Framework House’s exposed timber structure is used to demarcate the new areas while keeping them open and connected.

The new spaces include a kitchen and seating area, positioned underneath the wooden ribs and separated by a run of columns that double as open shelves.

A large dining table, additional storage spaces and a bathroom occupy the adjoining space within the existing house, which blends seamlessly with the extension.

These are connected to the home’s entrance hall via a doorway that creates a visual link between the front door and the garden.

The light tone of the wooden structure is complemented by white walls and contrasted with deep blue cabinets that line the edge of the kitchen.

“We chose to keep the interiors fresh, calm and clean so our clients could adapt their future interior design choices easily without the need to renovate the space again,” said the studio’s director Amos Goldreich.

Framework House’s kitchen opens onto a grey brick-paved patio in the garden, which echoes the pale brickwork of the extension.

The garden can also be enjoyed through a projecting metal window box that is deep enough to be used as a seat. 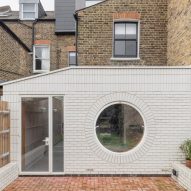 “Bringing in natural light and creating views into the garden where the clients’ children often spend time playing were both important elements of the brief,” explained the studio.

“A large box window in the centre of the sitting room offers views from both the sitting area and dining table, meaning the clients can keep an eye on the children while working or relaxing.”

Framework House is complete with two skylights that bring further natural light into the home, as well as a flat sedum roof that appears to merge with the garden when viewed from the first-floor bedrooms.

Other recently completed London extensions include a brick-clad gabled extension to a Victorian house in Camden by VATRAA, and an extension in Lower Clapton by Yellow Cloud Studio that adds a bright new kitchen and dining area to a terraced house.

Elsewhere, the studio designed The Ada and Tamar De Shalit House, which is a shelter for victims of domestic violence near Tel-Aviv featuring a secluded garden courtyard.

The photography is by Ollie Hammick.