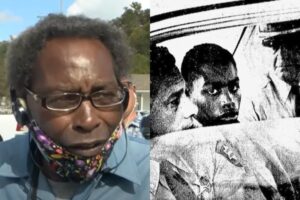 The 75-year-old’s Supreme Court case was instrumental in extending the possibility of freedom to hundreds of people sentenced to life in prison without the opportunity for parole when they were juveniles. The Louisiana parole board voted unanimously in favor of parole after Montgomery spent nearly six decades behind bars.

“It feels so wonderful,” Montgomery said.

“I destroyed my life, they life and the people that I hurt,” he later added.

Montgomery was just 17 when he was convicted in the 1963 killing of Charles Hurt, an East Baton Rouge sheriff’s deputy who caught him skipping school, NPR reports. The then-teenager was initially sentenced to death but had it overturned two years later after the state’s Supreme Court threw out his conviction due to Montgomery not receiving a fair trial.

The case was retried with Montgomery being convicted again and sentenced to life in prison without the possibility of parole. He has served out his time at the Louisiana State Penitentiary at Angola.

“He’s been in prison for 57 years. He has an excellent … disciplinary record. He is a low risk by our assessment. He’s got good comments from the warden,” board member Tony Marabella said.

Montgomery, who is hard of hearing, said little words during his virtual court appearance and had his lawyer repeat questions to him from the board members.

“I’m really sorry that I, that this happened,” Montgomery said. “I am going to have to live with this all my life, the rest of my life.”

Now as a free man, Montgomery plans to pay his respects to his mother, grandmother, and other family members who passed away while he was incarcerated. The Parole Project will help Montgomery find housing, receive health care, get an ID card, and learn how to navigate modern society considering he hasn’t walked freely since the 1960s.

“There is nothing left for him to accomplish at the Louisiana State Penitentiary,” said Andrew Hundley, founder of the Louisiana Parole Project. “It is time for Henry to come home.”