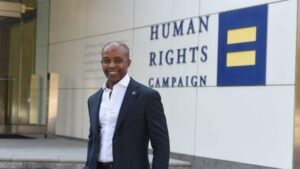 The president of the nation’s largest LGBTQ advocacy organization is facing calls to resign over his role in efforts to discredit one of the women who accused soon-to-resign New York Governor Andrew Cuomo of sexual harassment.

Cuomo repeatedly denied the allegations. However, he announced his resignation Tuesday after a decade in office.

LGBTQ advocates are now calling for David’s resignation, saying they are alarmed by incidents from last winter showing David aided in efforts to discredit one of Cuomo’s accusers. David, who urged Gov. Cuomo to resign after the report was released, told NBC News in an email that the findings “made him sick to his stomach.”

The report verifies that no one reported instances of sexual misconduct to David during his time as Cuomo’s counsel. Additionally, David only had contact with one of Cuomo’s accusers, Lindsey Boylan, and did not become aware of her allegations until last December.

On Dec. 13, Boyland released a series of tweets saying Cuomo sexually harassed her. That prompted Melissa DeRosa, the governor’s secretary, to ask David for a confidential personnel file on Boylan about her time working for the governor, according to the report.

David met with Boylan after other employees filed complaints against her and directed DeRosa to contact Cuomo’s acting counsel, who shared the full file with DeRosa. According to David’s testimony, a few days later, he shared additional documents relating to Boylan with Richard Azzopardi, then Cuomo’s senior deputy communications director and senior adviser. David added that he kept a copy of Boylan’s file.

That file was later leaked by Cuomo’s aides to a number of news organizations. The leak included documents David shared with Azzopardi, along with a statement saying there was no truth to Boylan’s claims. The report did add David was not involved in the documents being leaked.

The report said David was involved in another incident around the same time where he took part in the circulation of an op-ed denying Boylan’s claims. The letter was never published or sent to a media outlet but investigators said the letter damaged her credibility and attacked her claims as politically motivated.

Michigan Attorney General Dana Nessel tweeted she would not take campaign donations from the HRC unless a new president was named. Others who made statements calling for David’s resignation included civil rights attorney Alejandra Caraballo.

The same day the attorney general’s report was released, the HRC Foundation Board announced it was extending David’s contract for another five years. HRC Foundation Board chair Jodie Patterson and HRC Board of Directors chair Morgan Cox added they “have full confidence in Alphonso David as president of the organization.”