A dividing wall that’s part transparent, part mirrored separates the public and private spaces of this loft apartment in Manhattan, which architect Andrea Leung has renovated for herself.

New York-based Leung discovered the 1,600-square-foot (150-square-metre) Tribeca Loft within a historic building, and gut-renovated its interiors to suit her needs and tastes.

“One look at the raw space, and I knew exactly the sort of refuge I wanted to create,” said Leung. “One that unfolds and reveals itself slowly, that wows you initially with its grandeur and then capitalises on your curiosity.”

The architect used the hidden spaces of her grandmother’s Vancouver apartment as a precedent for the project, which she completed during the Covid-19 pandemic while living in the space throughout.

“Secret spaces fascinate me,” she said. “My grandmother’s penthouse pied-à-terre was full of them. Push on the correct mirror, and it opened into a hidden tatami room. Lean on the right bookcase, and a dimly lit hallway led you to her own personal oasis of calm.”

In its place, the private rooms were grouped and neatly organised along one side, leaving the public space for entertaining completely open.

An entrance hall, two bathrooms, a kitchen, a closet and a bedroom are now enclosed behind a partition that stretches the full width of the apartment, and can be accessed through swinging and folding panels.

While the bedroom remains visible through floor-to-ceiling, transparent glass panes, the other smaller rooms are concealed by mirrors and reduced in height to help with spatial proportions.

“The wall of mirrored doors allows the main living space to transcend its physical limitations and appear to double in size, while the generous windows with their original wavy glass are also reflected, bathing the walls with soft refracted light,” Leung said.

The building’s original cast-iron Corinthian columns remain exposed and stand out against the minimalist colour scheme of white walls and wide-plank oak floors.

In the living area, the furniture includes several brass and walnut pieces that Leung custom designed, including the dining table, credenza and console. 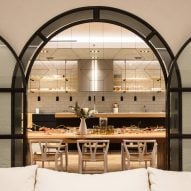 Brass accents are continued in Lee Broom‘s Eclipse Chandelier and a custom coffee table designed by Leung while an associate at Steven Harris Architects for the now-shuttered Barneys Chelsea Flagship.

The kitchen is lined with marble and patinated brass millwork, while the primary bathroom features a freestanding oval tub framed by surfaces of softly-veined grey stone.

Decor in the bedroom is also restrained by a greyscale palette, whereas the second bathroom accessed from the entryway is enveloped in veined marble with bright metallic accents.

Tribeca, a Lower Manhattan neighbourhood defined by and named after the triangle below Canal Street, has an abundance of loft spaces in formerly industrial and warehouse buildings.

A large number of these have been converted into residences and later renovated, with examples including an apartment where walnut cabinetry and sliding doors replace walls, and a duplex connected by a hanging, blackened steel spiral staircase.

Leung’s Tribeca Loft is shortlisted in the Apartment Interior category for the 2022 Dezeen Awards – see the full Interiors shortlist here.

The photography is by Sarah Elliott. 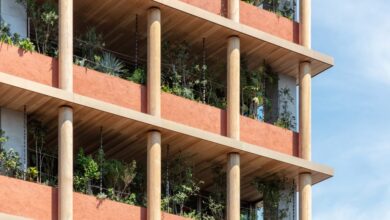 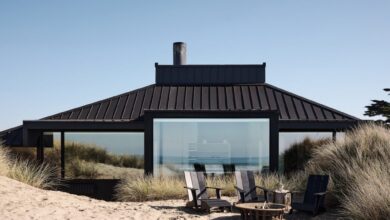 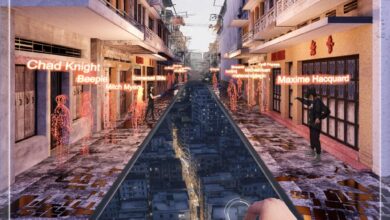 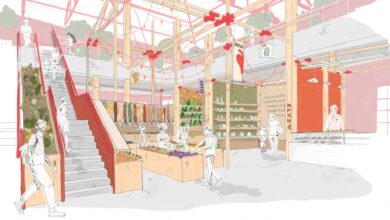 Ten student showcases from universities based in the USA