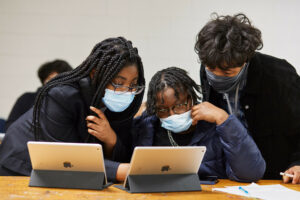 Apple kicked off Computer Science Education Week by announcing a new program in partnership with the Boys & Girls Club of America to help foster the STEM leaders of tomorrow.

As part of Apple’s “Everyone Can Code” curriculum, children and teens at local Boys & Girls Clubs in over a dozen cities will incorporate coding into their extracurricular activities. Apple says the new collaboration will give the BGCA youth the opportunity to create and learn the basics of app design and development.

“Together with the Boys & Girls Clubs of America, we’ve already introduced thousands of students to innovative technology experiences, and we are thrilled to expand our partnership to bring coding with Swift to even more communities across the country,” said Lisa Jackson, Apple’s vice president of environment, policy and social initiatives.

The coding plan of action is the latest in Apple’s ongoing partnership with BCGA through the company’s Community Education Initiative that aims to support its Racial Equity and Justice Initiative. Students will be resourced through iPad and Apple’s free Everyone Can Code curriculum along with ongoing professional support from Apple educators.

“At Apple, we believe education is a force for equity, and that all learners should have the opportunity to explore and develop coding skills for their future,” Jackson said.

The BGCA in Atlantic City opened a Design Lab and a STEAM Lab last year as part of the new coding program to support creativity, coding, and career development programming. Now as part of the program’s expansion, the Atlantic City Club is opening a second STEAM Lab in January to continue fostering opportunities for young learners.

“Working with Apple this past year has been transformative for our students, who have had the opportunity to explore entirely new ways of thinking, creating, and pursuing their passions,” said Stephanie Koch, Boys & Girls Club of Atlantic City’s CEO.

“The young people we work with are the future of Atlantic City, and we’re proud to partner with Apple to help them gain new skills to grow as learners and prepare for jobs in the 21st-century economy.”

Learn How to Wash Sheets and Protect Your Investment