The sets for Amazon‘s The Rings of Power television series draw on a range of historical European architectural vernaculars to make the fantasy world believable, says production designer Ramsey Avery in this interview.

“I think for a fantasy world to be tangible, you have to actually believe that you’re in it,” Avery told Dezeen.

The Rings of Power is an Amazon Studios-produced series that follows characters created by JRR Tolkien centuries before the events of The Lord of the Rings trilogy, the British author’s best-known work.

Avery guided the design of the sets, costumes and cityscapes that constitute the visual world of the show, which required developing a design language that took into account the high level of detail in Tolkien’s original lore.

“At the core, it’s always trying to go back to the words as much as we can,” he said.

“I’m a lifelong fan of Tolkien. And one of the things I did as I was starting this project is I picked up the Silmarillion again to get some of that deep history involved and the tonality of it.”

Influences for the architectural aspects were taken from medieval Europe for the human characters, while Avery looked to nature-oriented Celtic design as well as Gothic and Art Noveau typologies for the elves.

These distinctly northern European influences are mixed with elements of eastern European architecture in order to create a sense of existing in a different world from our own.

“Then going on the other end of that and looking at eastern Europe, in terms of architecture, so it’s not something we completely recognize as English or Scandinavian, but it has that feeling of being slightly otherworldly.” 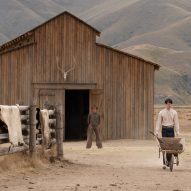 Avery cited artists and designers such as John Howe, Bob Fernandez Castro and Kate Holly as essential to achieving the level of detail that characterize the books.

“When you read the books, particularly The Lord of the Rings, you have a real visceral sense of the world,” said Avery.

“And we wanted to make sure that whatever we designed for these people, their cultures had that same visceral quality and that it felt like there was a bit of grit, a bit of earth to it, even in the beautiful places.”

Both Amazon’s series and Peter Jackson’s The Lord of the Rings movies, which were released between 2001 and 2003, were filmed in New Zealand.

But Avery had to ensure the world depicted in the television series has a very different look and feel to that in the films, which are set much later on in the chronology of Tolkien’s lore.

“The Second Age that we’re in is glorious and vibrant and everybody’s pretty much at the top of their game. We extracted the DNA of that Third Age and made it bolder and more vibrant and more alive in the Second Age.”

Avery also tried to convey the sense of an earlier age in the set design itself.

The production design relating to the Harfoots – the progenitors of the Hobbits from later Tolkien texts – suggests an earlier stage of the fantasy race’s evolving designs that precede the famous round-doored hill houses seen in the Jackson films.

“Hobbiton is all about hills and round doors,” Avery said. “So our carts have a little bit of that hill shape and they’ve got round wheels on them.”

For the physical sets, 3D printing was used for many of the designs, but these digital assets had to be refined by hand.

“Everything that got digitally made had to have a human hand come back over the top of it and reform the sculpture of it, add, subtract, adapt, then use layers of paint and gilding or detailing and ageing to take that digital edge off,” Avery said.

Avery has worked on a number of media projects in a variety of genres including art supervision on Guardians of the Galaxy vol 2 and Star Trek: Into Darkness and was also the design director for Marvel theme park for Dubailand.

The Rings of Power is streaming on Amazon Studios and releases every Friday.

Architecture and design often take a leading role in films. Dezeen previously rounded up 10 films for architecture fans recommended by our readers.

The images are courtesy of Prime Video.