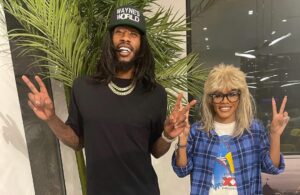 Teyana Taylor‘s first of two Halloween celebrations came to a screeching halt on Saturday when three women were the victims of an attempted robbery outside.

The singer/director was hosting a party at the Sunset Room in Los Angeles when gunshots were heard outside, TMZ reports. Authorities say three women had been approached by three armed men who attempted to steal from them. One of the women was pistol whipped as the three tried to fight off the assailants.

One of the security guards at the nightclub got wind of what was happening and proceeded to exchange gunfire with one of the would-be thieves. No one was injured by the shots, though bullets were lodged into several nearby cars.

The woman who was assaulted refused medical assistance when an ambulance arrived on the scene.

While this party seems to have been open to the public, Taylor is set to co-host a private bash on Sunday alongside Karrueche Tran, LaLa Anthony and music executive Lenny Santiago. Anthony confirmed the Halloween soiree, which she and Santiago have partnered on in the past, during an interview earlier this month.

On Nov. 7, Taylor is set to embark on The Last Rose Petal tour, a run of 12 farewell performances ahead of her retirement as a recording artist. She announced her plan to retire in an Instagram post in September, which also included her tour schedule.

“How lucky am I to have something that makes saying goodbye so hard,” she wrote. “However for every goodbye God makes the next hello closer. Come out and watch me, leave it all out on the stage… One last time… Just for you & as my last rose petal falls, I say farewell….”

According to Complex, Taylor originally hinted at the idea of retiring in December of last year, voicing her frustration about the lack of push her music received and saying that she felt “super under appreciated as an artist.”