Software that simulates the growth of salt in various conditions has been created by Henna Burney and Kalijn Sibbel of Atelier Luma to help designers make use of the material in their own projects.

Developed in collaboration with algorithmic design studio Abnormal Design, the software allows users to visualise and better understand the crystallisation process that occurs in salt flats.

It was developed off the back of a four-year-long design project by Burney and Sibbel with design and research laboratory Atelier Luma, involving exploration of the Camargue marshes in southern France to find new uses for the salt that is produced there.

The software is being introduced today by Burney as part of her guest editorship for Dezeen 15, a digital festival celebrating Dezeen’s 15th birthday.

As part of the event, Burney will speak to Dezeen’s editor-in-chief Marcus Fairs in a live interview to explain why she and the studio believes salt is “a material of the future”.

“This will be a tool for designers to start using salt as material and to conceive projects with it,” Burney told Dezeen.

“Using the crystallisation process requires somehow a particular way of thinking as salt is a growing material,” she added.

“The tool will make this process simple and more accessible,” continued Burney. “This will potentially incite designers to use salt as a material and to understand its limits and its possibilities.”

As part of their four-year-long design project at Camargue salt flats, Burney and Sibbel created thousands of salt cladding panels. These were made by submerging bespoke frames underwater at the Camargue salt flats and they are now installed at the Luma Arles art centre by Frank Gehry.

The duo has since been developing ways to use the marshes to create a salt-crystal lamp with the Italian design studio From Lighting.

However, due to the need to create spaces for wires and electrical equipment within the lamp, the studio required more advanced tools than those used to make the panels. This led them to develop the software. 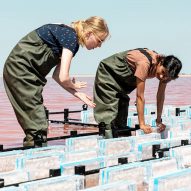 The software, which is hosted on the 3D animation software Houdini, uses algorithms to simulate the growth of salt crystals.

Users of the software can change various parameters, such as temperature, air humidity and wind speed, to observe how this impacts the growth of the salt.

“We worked together [with Abnormal Design] on the development of an algorithm to mimic the salt crystals growth,” said Burney.

“This included the salt crystals growth rate, the crystals chance to create secondary crystals and have more faceted crystals, and the maximum size crystals.”

The software can also mimic the application of an “anti-crystallisation tool” – materials such as glass or silicone to which salt crystals cannot attach and grow when submerged underwater. These are used to guide the areas of salt growth and create various shapes.

“The idea of using these [anti-crystallisation] materials is to stop the crystals, like when you have a cake mould to make the edges of the cake flat,” Burney explained.

“This is what we used for the panels we developed for the tower,” she continued. “In order to make straight edges, we used a Plexiglas [acrylic] frame instead of cutting the sides after the crystallisation.”

According to Atelier Luma, the tool has proven to be “very helpful” already and will be used to continue developing the designs of the salt lamp that sparked the idea for the software. It will now be continually developed so it can be shared as a learning and design tool.

Atelier Luma is a research platform and circular design lab that was established in 2016 by Luma Arles – an arts centre in Arles. It is currently led under the direction of Jan Boelen.

Other projects by the studio include a bioplastic made from algae, which it believed could completely replace fossil-derived plastics over time.

Switch Was The Best-Selling Console Of October In US, Metroid: Dread Sets New Franchise Record