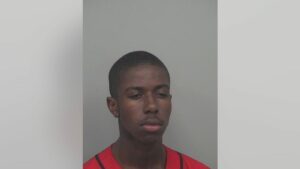 A woman was found dead in her Lawrenceville, GA home on Thursday morning following an altercation with her 18-year-old son.

Authorities told Fox 5 that Gwinnett County Police officers were dispatched to an address on Misty Valley Court in the Atlanta suburb around noon on Thursday, following reports of a domestic-related assault. Upon entering the home, they found 42-year-old Marcia Chance dead.

Her son, Varian Hibbert was also at the scene and immediately taken into police custody. He’s been charged with felony murder, aggravated assault, and possession of a knife during the commission of a felony.

Chance’s youngest son made the 911 call that lead to the gruesome discovery, 11 Alive reports. The woman also had an older daughter who lived outside of the family home.

“I was really shocked by that,” said Cameron Boyd, who lived across the street from Chance’s house. “I didn’t think he was really capable of doing something like that. But like, it’s your mom and it’s Thanksgiving, that’s the crazier part!”

While authorities have not indicated a possible motive for the attack, neighbor Henriette Robinson told reporters that there had been some signs Hibbert might be suffering from mental health issues.

“He would come outside, talking to himself,” she said. “We even caught him on our camera, trying to come in our door. It’s really disturbing. I feel for this mother.”

Hibbert had been arrested twice in August. He was first charged with criminal damage to property in the 2nd degree and willful obstruction of law enforcement officers by use of threats or violence on Aug. 2.

Thirteen days later, Hibbert was arrested a second time on similar charges. Authorities did not release details about either incident; however they did tell 11 Alive that they had been called to the home before.

Hibbert appeared before a judge on Saturday morning at 8:30am. At press times, he remains in custody at the Gwinnett County Detention Center.

Antwain Fowler's Mom To Honor His Legacy With New Restaurant