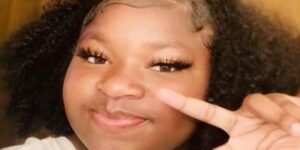 Earlier this year in April, BLACK ENTERPRISE reported that a Columbus, Ohio, police officer shot and killed a young Black foster child named Ma’Khia Bryant in response to a 911 call. Allegedly, Bryant was threatening to stab other teen girls at her foster home. Now, an autopsy report was released that details the young girl’s cause of death.

According to The Columbus Dispatch, an autopsy done by the Franklin County Coroner’s Office in Ohio has confirmed that 16-year-old Ma’Khia Bryant had been shot four times back in April by a Columbus police officer. She was reportedly being attacked and about to stab another young woman with a knife outside a Southeast Side foster home. The coroner has ruled the police shooting a homicide.

The autopsy report shows that Bryant was shot four times on her right side by Columbus police officer Nicholas Reardon, who arrived on the scene after officials received a 911 call around 4:45 p.m. on April 20. The 911 caller stated a disturbance involving a person with a knife at a home on the 3100 block of Legion Lane. Bryant and her 15-year-old sister had been staying at a foster home located there.

Shortly after the police shooting, Bryant’s foster mother, Angela Moore, opened up about the events leading up to Bryant’s death. Moore revealed that the incident started with two of the woman’s former foster children coming to the home and telling the current fosters to clean up the house.

“It was over keeping the house clean,” Moore said. “The older one told them to clean up the house because ‘Mom doesn’t like the house dirty,’” Moore recalled being told after she arrived home from work. “So that’s how it all started.”

Bryant and the unidentified woman argued over the chores at the Columbus home. The women had come to visit to celebrate Moore’s birthday.

CNN reported that Moore revealed that arguments between Bryant and the other party were a regular occurrence. She also told CNN that she was relaying what she heard from another young lady present at the time of the shooting.

The caregiver was not home at the time of the shooting.

Clever Places to Sell Used Books Online and In Person