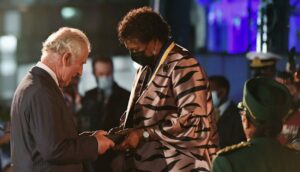 While Barbados declared itself independent from the UK in 1966, the country chose to remain a constitutional monarchy, meaning that though no longer under the jurisdiction of the United Kingdom, the country still recognized Queen Elizabeth II as Queen of Barbados, with then Prime Minister Errol Barrow ruling at her side.

While the island nation is now fully independent, it has elected to remain within the Commonwealth of Nation, which the BBC now describes as a loose association of former British colonies and current dependencies.

Prince Charles, the heir apparent to the throne, attended the handover ceremony on behalf of his mother, who has been ill. During a speech commemorating the occasion, he acknowledged the dark past that once made Barbados one of Britain’s most prized colonies, NPR reports.

“From the darkest days of our past, and the appalling atrocity of slavery, which forever stains our history, the people of this island forged their path with extraordinary fortitude,” he said. ““Emancipation, self-government and independence were your waypoints. Freedom, justice and self-determination have been your guides. Your long journey has brought you to this moment, not as your destination, but as a vantage point from which to survey a new horizon.”

The Queen sent her “warmest good wishes” for “happiness, peace and prosperity in the future” of the island, which she says holds a special place in her heart.

During the changeover ceremony, which kicked off just after midnight local time, Mason bestowed upon Rihanna the title of National Hero.

“On behalf of a grateful nation,” Prime Minister Mia Mottley as she presented the honor, “but an even prouder people, we therefore present to you, the designee, for national hero of Barbados, ambassador Robyn Rihanna Fenty may you continue to shine like a diamond.’

Rihanna becomes only the second woman and 11th person overall to receive the special designation.