A honeycomb-shaped installation and a “winged” pavilion are among the finalists of this year’s Winter Stations competition, which brings together designs for temporary beach stations in Toronto.

This year’s brief was to create pavilions that encourage people to explore the outdoors, in response to the theme of resilience. Three student proposals and three proposals from established designers were chosen for the temporary structures along Woodbine Beach. 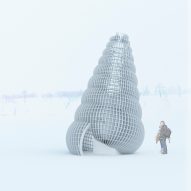 Studios taking part were asked to submit pavilion designs that celebrate “the ability of people to withstand and push through challenging and unprecedented times” for the annual design competition.

Due to potential changes to coronavirus regulations in Toronto, the designs should be able to be easily moved to alternative settings, while also interacting in some way with the existing lifeguard stands on the beach.

The Hive, which was created by Kathleen Dogantzis and Will Cuthbert, is a domed installation based on the hexagonal structure of a bee colony. Its golden yellows and dull oranges are reflective of the colour variation of honey.

This installation was selected as a winner of a new category created in partnership with the Young Women’s Christian Association (YWCA). It is dedicated to the people staying at the nearby temporary emergency shelter.

Another pavilion that will stand further along the beach is a winged pavilion called S’winter Station. Designed by students at Ryerson University, it acts as a shelter from harsh weather conditions. Its wings mitigate strong winds, protecting visitors from snow and hail.

The designers created concrete panels with different sized openings that allow snow and light to enter, while simultaneously providing visitors with views onto the surrounding beach.

Cemre Önertürk and Ege Çakır, who work together under the name Melt, drew on the ways in which people have become reliant on digital screen communications for their station proposal.

Called Enter Face, it is composed of two black irregularly shaped structures set metres apart from one another. Visitors who walk inside either structure can peer out through a transparent section of the station to watch life outside of their box.

The duo hopes that the station will encourage visitors to engage with Toronto’s wildlife.

A station topped with a trellis roof that has red walls on the outside and mirrored walls on the inside, Introspection aims to prompt visitors to self-reflect. The red lifeguard tower will sit at the centre of the station as a reminder of stability.

The last student design proposes a bridge between the Indigenous and non-Indigenous people of Canada and is designed to unite people through the act of gathering.

One Canada was developed by Alex Feenstra, Megan Haralovich, Zhengyang Hua, Noah Tran, Haley White and Connor Winrow at the University of Guelph.

Winter Stations was founded by RAW Design, Ferris + Associates and Curio. Previous winners include a large wind chime by students at Centennial College and a giant seashell called The Epitonium by Iranian team M. Yengiabad.