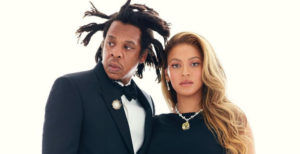 It’s rare for “Queen Bey” to be involved in controversy, and she certainly doesn’t normally let on that there’s a problem.

But there is much controversy surrounding Beyoncé and Jay-Z’s camp after she made history posing alongside a rare art piece from the late, great artist Jean-Michel Basquiat as the first Black woman to wear an iconic Tiffany & Co. Yellow Diamond.

According to The Sun, after critics bashed the “Bootylicious” singer for wearing a ‘blood diamond,’ a source stated that “Beyonce is aware of the criticism and is disappointed and angry that she wasn’t made aware of questions about its history. She thought that every final detail had been vetted, but now she realizes that the diamond itself was overlooked.”

It’s been reported that as part of the deal, Tiffany has promised $2,064,600 toward internship and scholarship programs for historically Black colleges and universities (HBCUs).

The history of the diamond dates back to 1877 when it was dug from the Beers’ Kimberly Mine in colonial South Africa by Blacks who were poorly paid and made to work in horrendous, cramped conditions that often led to fatal accidents.

It has been reported that the workers had horrible housing conditions that had no natural water or waste disposal. Approximately 1,144 people reportedly died from a range of illnesses that included pneumonia and scurvy between 1897 and 1899 alone.

The diamond featured in the Beyoncé/Jay-Z promotion was a yellow diamond sold to Charles Tiffany back in 1879. Tiffany is the person who founded the high-end jewelry company.

In the past century, socialite Mary Whitehouse showed the yellow diamond off at the 1957 Tiffany Ball in Rhode Island. British actress Audrey Hepburn wore it to help promote her movie at the time, Breakfast at Tiffany’s, in 1961.

Lady Gaga wore that diamond necklace and it was all love but as soon as it lands on Beyoncé’s neck y’all suddenly remember where it’s from and how it’s a blood diamond. pic.twitter.com/oHhO1xXuB5

Okay so we can drag Tiffany for owning a blood diamond but I just want to say that yall only now know it’s a blood diamond when it’s Beyoncé wearing it and not when Audrey wore it or lady gaga. I digress…

It was a blood diamond, then too. The shame is on Tiffany’s, not Beyonce, though. I have no quibble with her wearing it for an ad. Not like she owns it.

Let’s wait until Beyonce wears something that has been worn by others to now request that we expand the definition of blood diamond to fit our selective outrage. It’s so fake especially when everyone was quiet when a white woman wore it just 2 years ago!

did y’all have this blood diamond discourse about gaga or do y’all only reserve discourse you don’t actually care about for beyonce https://t.co/Q0ydGAPbbH