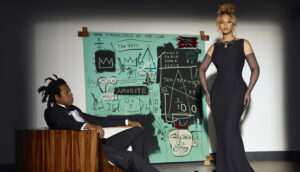 Leave it up to the Carters to unveil a rare never-before-seen painting from the late great artist Jean-Michel Basquiat. But many find their flashy photoshoot a bit tone-deaf.

Beyonce and Jay-Z made history as usual by posing alongside the rare art piece as Queen Bey became the first Black woman to wear an iconic Tiffany & Co. Diamond, NPR reports.

In addition to modeling the rare diamond, the Carters also posed alongside Basquiat’s Equals Pi painting. The 1982 piece was sold in a private collection over three decades ago and has never been seen before in public. It’s also the first ad campaign the Carters have appeared in together as a couple.

On Monday, the luxury jeweler unveiled the Carters as the face of their ad “ABOUT LOVE” campaign that’s aimed at “celebrating modern love.” In the photos, Bey wears the rare 128-carat yellow Tiffany Diamond that the company acquired in 1878 and rarely brings out.

But Black Twitter had much to say about the billionaires posted up next to a piece of Basquiat art given that the Brooklyn native was an anti-capitalist “who used social commentary in his paintings as a tool for introspection and for identifying with his experiences in the Black community of his time, as well as attacks on power structures and systems of racism,” according to Wikipedia. And “his visual poetics were acutely political and direct in their criticism of colonialism and support for class struggle.”

Beyoncé wearing the iconic Tiffany Stone alongside Jay Z and a never-before-seen painting by Basquiat? pic.twitter.com/um5KSlfDf2

insane to me that rich people can just buy art from artists who have passed and no one else gets to see it, kinda gross imo like these pieces should be able to be seen by everyone, thats literally what basquiat woulda wanted https://t.co/GVb3lRSkAE

Other criticized how the rare piece of art was held onto just to end up in an ad.

The fact that they showed off this never-before-seen piece of art from Jean-Michel Basquiat for an ADVERTISEMENT doesn’t sit well with my spirits… pic.twitter.com/MOCpOukf8T

Beyonce has become only the fourth woman to wear the diamond in over a century and the first Black woman to receive the honor. Audrey Hepburn infamously wore it in photos for Breakfast at Tiffany’s while Lady Gaga was allowed to wear it at the 2019 Academy Awards.

“Love is the diamond that the jewelry and art decorate,” the couple said in a statement to People.

“We don’t have any literature that says he made the painting for Tiffany,” Alexandre Arnault, the executive vice president of products and communications at Tiffany’s, told Women’s Wear Daily.

“But we know a little bit about Basquiat. We know his family. We did an exhibition of his work at the Louis Vuitton Foundation a few years back. We know he loved New York, and that he loved luxury and he loved jewelry. My guess is that the [blue painting] is not by chance. The color is so specific that it has to be some kind of homage.”

Even with critics, let’s remember Beyonce once said, “You know you that bi*ch when you cause all this conversation.”

Aliens: Fireteam Elite Review – In Space, No One Can Hear You Snore