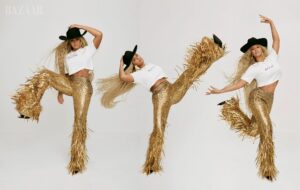 The year is 2001, and society is apparently not ready for Beyoncé’s jelly. So in response, Queen Bey pens one of her group’s most iconic hits.

Beyoncé recently opened up in the September issue of Harper’s Bazaar about the inspiration behind Destiny’s Child classic bop “Bootylicious.” Released 20 years ago, the song has become a body positivity anthem.

The Grammy Award-winning singer admits that issues of body shaming are nothing new, and she actually wrote the song after facing criticism over her curvaceous figure.

“I remember when I started hearing people criticize me after I had put on some weight. I was 19. None of the sample clothes fit me. I was feeling a bit insecure from hearing some of the comments, and I woke up one day and refused to feel sorry for myself, so I wrote ‘Bootylicious,’” BeyoncÉ recalled.

The song was released before Beyoncé went on to become an international solo superstar. But it was a prerequisite to the Houston native stepping into the confident Sasha Fierce her fans know her to be.

“It was the beginning of me using whatever life handed me and turning it into something empowering to other women and men who were struggling with the same thing,” she added.

She credits her father and former manager Matthew Knowles for motivating her to write her own music, and she praises her mother Tina Lawson for giving her early examples of what a hard-working woman looks like.

“My mother has always been my Queen and still is. She has always been so strong and is filled with humanity,” Beyoncé said. “She worked 18 hours a day with calloused hands and swollen feet. No matter how tired she was, she was always professional, loving, and nurturing. I try to handle my work and run my company in the same way.”