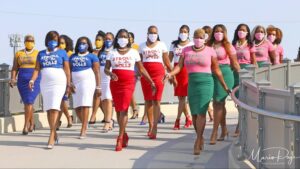 In a bid to enact voting rights legislation and police reform, President Joe Biden has tapped the Divine Nine historically Black fraternities and sororities and their alumni.

The Divine Nine is largely considered the most powerful organization in the Black community, sporting 2.5 million members. The organization  also including some of the most prominent Black men and women in government today. Vice President Kamala Harris, HUD Secretary Marcia Fudge, House Majority Whip Jim Clyburn, White House Senior Advisor Cedric Richmond are all in a fraternity or sorority of the Divine Nine.

The Biden Administration is trying to strengthen its relationship with the group as it tries to fulfill promises made by Biden. Black Americans are becoming increasingly frustrated with Biden’s inability to come through on voting rights legislation, police reform and student loan cancellation.

“We’ve been at this for quite a while and have had people in so many seats on those political tables for years. And we know that that makes a huge difference in terms of making sure that your voice is significant in terms of what it could do,” Beverly Smith, current National President of Delta Sigma Theta Sorority, Incorporated told Politico.

“So it’s the start of discussion with this administration, but it’s work the Divine Nine has been doing since its inception.”

The Biden Administration views the Divine Nine as an effective and willing messenger to pass information to and from their own members as well as the Black community at large. Vice President Harris hosted an in-person meeting with the Council of Presidents of the nine sororities and fraternities earlier this month.

It marked the first time all nine organizations have been invited to the White House to meet with a president or a vice president according to a White House official. Such a meeting didn’t happen even during the Obama administration.

The outreach by the administration comes as many have lost patience with the Biden Administration’s playbook of executive orders and speeches to no one and are demanding a more effective and forceful approach.