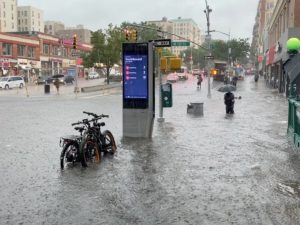 Reuters – President Joe Biden highlighted the ravages of climate change during a visit to flood-damaged New Jersey on Tuesday, putting a focus on domestic priorities after weeks of public attention on the chaotic U.S. withdrawal from Afghanistan.

Biden, a Democrat who has made fighting global warming one of his top policy priorities, is highlighting the devastation wrought by Hurricane Ida to press the need for infrastructure and climate mitigation spending.

“For decades, scientists have warned of extreme weather … and climate change was here and we’re living through it now, we don’t have any more time,” Biden said during a briefing by state and local leaders in Hillsborough Township, New Jersey.

With wildfires, hurricanes and floods, Biden noted that every part of the United States was getting hit by extreme weather.

“We can’t turn it back very much, but we can prevent it from getting worse,” Biden said. “We’re all in this together and … we’ve got to make sure that we don’t leave any community behind.”

On Tuesday he visited New Jersey and was scheduled to also stop at a storm-hit neighborhood in New York City’s Queens borough.

The president’s flood damage trips revive Biden’s familiar role of consoler-in-chief, a shift from the time spent in recent weeks defending his decision to pull U.S. troops from Afghanistan and the deadly aftermath that ensued.

The United States is still working to get Americans left in Afghanistan out of the country while resettling tens of thousands of evacuees. Still, Biden is expected to focus in the coming days on domestic issues: a fight to protect women’s reproductive rights in the wake of a new Texas anti-abortion law, the end of extended unemployment benefits for many Americans and new measures to fight COVID-19.

On Saturday, the 20th anniversary of the Sept. 11, 2001 attacks, he will visit the three sites where hijacked U.S. domestic planes crashed. Next week, he plans to visit California to boost Democrat Governor Gavin Newsom’s effort to stay in office amid a recall election, following a visit by Vice President Kamala Harris on Wednesday.

On Tuesday, New Jersey Governor Phil Murphy said it would take “months more likely than weeks” to complete cleanup, repairs and rebuilding after his state was ravaged by flooding and a tornado from the remnants of Ida.

Dozens of people have died from the hurricane’s destruction and some states are still grappling with widespread power outages and water-filled homes.