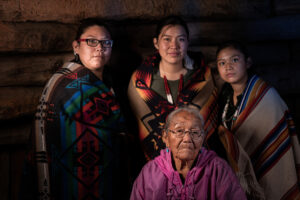 The order tasks the DOJ, Interior and Homeland Security to address and create a strategy in 240 days for specific law enforcement issues and to provide tribal nations with support in implementing tribally centered responses as well,” to combat violence against Native communities. Additionally, the Department of Health and Human Services will be tasked with developing plans for violence prevention and victim support.

“Today, I’m directing federal officials to work with tribal nations on a strategy to improve public safety and advanced justice,” Biden said at the White House’s first-ever Tribal Leaders Summit, according to CNN. “This builds on the work we did together on reauthorizing the Violence Against Women Act in 2013, when we granted authority to tribes to exercise jurisdiction over non-Indian offenders who commit violence on tribal lands.”

The Biden Administration has made other efforts to curb the number of missing and murdered Native Americans. Thousands of Indigenous women and girls have been killed or vanished for years. Their families and activists say the cases are often disregarded or ignored by federal law enforcement, which investigates crimes on tribal lands.

In April, Haaland announced a new unit within her Department’s Bureau of Indian Affairs aimed at the crisis of missing and murdered Native Americans, calling it “a crisis that has been underfunded for decades.”

Biden announced his administration also directs more than 20 agencies to protect tribal treaty rights. Under the executive order, representatives  from the departments of  Agriculture, Defense, Commerce, Education, Energy, Homeland Security, Housing and Urban Development, Interior, Justice, Labor, Transportation, Veterans Affairs, State, and the Environmental Protection Agency, Office of Personnel Management, the Advisory Council on Historic Preservation, and the Council Environmental Quality, will be required to issue report over the next 180 days on efforts to strengthen treaty protections.