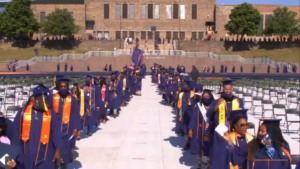 The executive order aims to address racial disparities between HBCUs and majority-White schools by implementing new strategies to advance by expanding their access to federal funds and establishing a board of HBCU leaders to promote the school’s best interests.

“It is the policy of my Administration to advance educational equity, excellence, and economic opportunity in partnership with HBCUs, and to ensure that these vital institutions of higher learning have the resources and support to continue to thrive for generations to come,” the executive order states.

However, the president seems to have forgotten his campaign promise to cancel student loan debt disproportionately impacts Black borrowers more than any other race. The type of student loan debt that Biden promised to cancel for HBCUs, institutional student debt, is different from federal loan forgiveness.

As a result, HBCUs have used COVID-19 emergency funds to cancel student loan debt for their students. Clark Atlanta, Wilberforce, Hampton, Grambling State University more than a dozen other HBCUs have cancelled their student debt to give them a leg up in the future.

During his presidential campaign, President Biden promised to address the $1.7 trillion student debt crisis, reform student loan programs and forgive federal student loan debt for borrowers from public colleges and universities for families earning less than $125,000 per year, including HBCUs.

However, the president has targeted student loan debt for defrauded students and students with disabilities. Progressive Democratic Senators Elizabeth Warren and Chuck Schumer  and a bevy of civil right organizations have kept the pressure on Biden to keep his promise.

“Who has student debt?” Fudge said. “Poor people, Black people, brown people. We’re the people who carry the most debt. And so the system’s already skewed toward us not being creditworthy.”

Build Your Own Village In Staxel, The Latest Farming Sim Headed To Switch