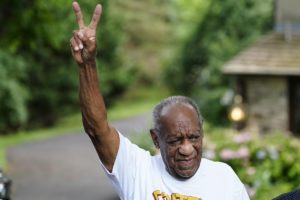 Although Cosby is a free man, he is not yet out of the woods legally.

According to The Hollywood Reporter, Cosby is currently facing a civil lawsuit that has been brought by Judy Huth in Los Angeles Superior Court. She has alleged that she had been sexually assaulted by him at the Playboy Mansion back in 1974. The comedian plans to invoke the fifth amendment in that civil case.

Cosby’s attorney, Michael Freedman has appeared before a Los Angeles judge and has stated that he will continue to not speak about his alleged assaults.

“Defendant does not agree that merely because the Pennsylvania Supreme Court vacated Defendant’s criminal conviction for a single offense, allegedly arising from an incident that occurred in 2004, Defendant no longer enjoys a Fifth Amendment right to remain silent,” Freedman stated in a status conference report that was made public on Wednesday.

“This is particularly so where numerous states have no criminal statutes of limitations for sex crimes. It is well-settled that the Fifth Amendment protects both the innocent and the guilty. Having already been forced to face a malicious criminal prosecution that resulted in an unlawful three-year incarceration, Defendant is not confident that such a risk does not still exist in this jurisdiction and others.

“Indeed, prior to a stay being entered in this case, LAPD claimed that the Huth matter is an open criminal investigation. “Thus, Defendant anticipates that if he is forced to sit for a deposition, he will exercise his Fifth Amendment guarantees absent a court order ruling that he has no Fifth Amendment right in this jurisdiction or any others.”

The New York Daily News also reported that, according to Huth, she had first met Cosby back in 1974 when he allegedly approached her, she said was 15 at the time, and a 16-year-old friend while he was working on a film set. Huth claimed that Cosby served her alcohol when she met up with him a few days later and took her to, what she believed to be the Playboy Mansion.

Huth claims that, while at the mansion, Cosby led her to a bathroom and attempted to kiss her on the mouth, and slid his hand down her pants. She then stated that Cosby later grabbed her hand and forced her to perform a sex act on him.

The lawsuit was filed against Cosby on Dec. 2, 2014. She accused him of sexual battery and intentional infliction of emotional distress.