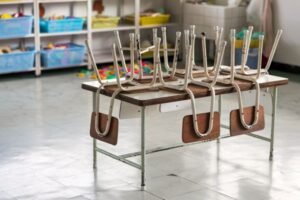 A Black male teacher in Boston scored a big win after winning a discrimination lawsuit against the school he worked at.

A Suffolk Superior Court jury ruled that Charles Sherman Neal was terminated from his job only after filing a number of discrimination complaints against the Boston Community Leadership Academy, Boston Globe reported. Neal was the only Black male teacher at the public school, where he shared an office with the school police.

Neal had been working to start a gym program at Boston Community Leadership Academy for the last decade. But he was fired from his job after filing a series of discrimination complaints with the Massachusetts Commission Against Discrimination.

The teacher’s attorney Ilir Kavaja said Neal suffered from depression and anxiety after his termination and was unable to leave his home or watch television. As a result, he was awarded $1.7 million after the jury found the school’s headmaster and other officials retaliated against Neal for exercising his legal right to raise concerns about workplace discrimination without fear of retribution.

“What the Boston Public Schools did to him is despicable,” Kavaja said. “This is a man who had cancer and overcame it and went to work right away and he was put through the wringer.”

Among some of the incidents Neal reported including the school’s decision to install cameras into the gym area where he worked without telling him. They also sent a monitor to the girls’ locker room during Neal’s teaching time but failed to do so whenever a white teacher substituted for him.

Neal had been reporting discrimination complaints following his hiring as a part-time teacher in 2008. He was finally given a permanent position in 2012 after complaining about the discriminatory hiring practices. He was initially fired in 2016 following his first series of complaints of noting him being treated differently from his white counterparts. Neal was reinstated after an investigation only to be fired again, CBS Boston reported.

“They had no basis to believe that this person couldn’t fulfill the obligations of his job,” Kavaja said. “They just got tired of his complaints and didn’t want to deal with him.”