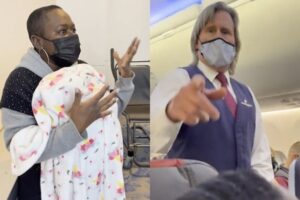 A Black couple from Philadelphia plans to sue American Airlines for kicking them and their newborn baby off a flight and assaulting them.

Allan Ali and Kamia Hoilett captured parts of their exchange with two AA flight attendants before their flight from Charlotte, NC, to Philadelphia. In a video uploaded by Ali, you can see Hoilett holding their 7-week-old baby while trying to explain to the flight attendant the nature of events that occurred.

“@americanair your staff is absolutely disrespectful!!!! Kicked a new mother and our 7 week old baby off the plane for absolutely nothing,” Ali captioned the post. “We are coming for them this is absolutely unacceptable!!!!! Please share!!!!! We need answers!!!!!! I need answers asap!!!!!!”

The 6-minute video shows Ali and Hoilett attempting to resolve an issue with the flight attendants while Ali filmed the exchange. But at one point, you can see Ali’s phone get smacked out of his hand.

In a second video, Hoilett can be seen explaining what happened on the plane after the family was removed from the flight.

“Today could’ve been avoided with a little human decency and compassion,” Ali captioned the clip. “I ask you had my queen not been black… would this have occurred. The answer is unequivocally no! @americanair we need answers! Please continue to share we need justice!!!”

While speaking with The Shade Room, the family explained how things escalated after they stood up on the plane to let a man who was sitting in their row into his seat. Ali claims the man aggressively told them, “Y’all have to get up.”

While getting out of the row, Hoilett says the flight attendant was also standing in the row and blocking the pathway they needed to get up. “Is this going to be a problem?” they claimed the attendant rudely asked.

The attendant then told Hoilett to sit down and buckle her seatbelt in “a passive-aggressive tone.” After Hoilett told the attendant she didn’t like how she was being spoken to, she claims the attendant stormed off to report the incident to the captain who instructed them to remove the family from the flight.

The now-viral video shows the events that took place after the family was asked to exit the flight.

Virginia Mother of Five Fell On Hard Times, Asks For Help and Her Local Community Showed Out