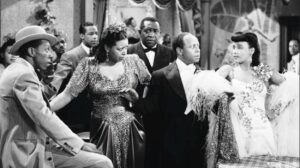 Those who want to know who wrote Cooley High or where Shaft In Africa was filmed, can now do so through the Black Film Archive, an online database of Black films.

The Black Film Archive, launched last week, was created by Maya Cade and provides a synopsis of more than 200 Black films from 1915 through 1979 and a link to stream it as well. Cade, who wrote on Twitter that the archive took more than a year to make, told the Chicago Tribune that Black moves have always been part of her life.

“I have always leaned on Black cinema to sustain me. And I’ve tried to watch films that are new to me at least twice a week,” Cade said.

some news: today, i’m excited to launch https://t.co/lznpLOtC9b. this ever-expanding black film archive provides history and context to over 200 black films made from 1915 to 1979 currently streaming.

every description on the site is lovingly written & researched by me. pic.twitter.com/JW4wwPRVl5

The Black film archive also brings life to movies made in the 1930s, 40s and 50s, a time that was considered devoid of Black films. Chicago based Producer and Director Oscar Micheaux, the first Black independent filmmaker, made 43 movies between 1919 and 1948. Several of his movies are included in the database.

Cade’s description for Micheaux’s 1925 movie Body and Soul as the “story of a sinister minister is a direct critique of the power of the cloth. Micheaux casts Paul Robeson in dual roles as the corrupt preacher and his own brother, a well-meaning man. This masterwork boasts social commentary that still resonates today.”

Other movies in the archive include the 1958 noir “Anna Lucasta,” starring Eartha Kitt and Sammy Davis Jr. Or 1940′s “Broken Strings,” about an injured concert violinist who pins all his hopes and dreams on his son, who would rather play swing.