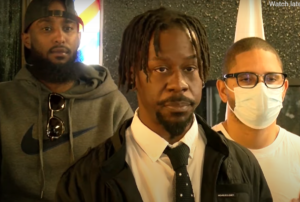 A Black job applicant hopeful about landing an audio-visual job at the Hilton San Diego Bayfront is suing after being discriminated against over his natural hairstyle.

Jeffrey Thornton worked for Encore Global in Florida before the pandemic, The San Diego Tribune reports. But following a pandemic-led furlough, Thornton was let go from the Illinois-based event management firm. Once he learned the company was returning to work, he was confident he could get his technical supervisor job back and transferred to San Diego, where he now resides.

Thornton appeared for a Nov. 1 interview and came with stellar recommendations from his former colleagues back in Florida.

“I was told that I was recommended by my East Coast references, and I should find the transition to be no problem,” he said. “All that was left was to discuss was the dress code, which was not surprising considering I’d be working in the hospitality environment and I would have client-facing responsibilities.”

However, he was surprised to learn that the dress code included cutting off his locks to comply with the company’s standards.

“I expected that I was to remove my ear gauges, I’d be willing to trim my facial hair but I wasn’t prepared to be told that I would need to cut my hair to comply with Encore standards,” Thornton said.

Thornton’s attorney Adam Kent said the issue lies behind the fact there is currently no means of enforcing or penalizing companies who violate the CROWN Act, KPBS reports.

“We have asked the court not only to make Mr. Thorton whole for the damages he has suffered but to make sure that Encore Global is never again able to enforce grooming policies that disparately impacts Black Americans,” he said.