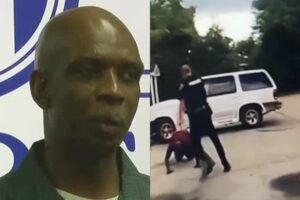 The city of Orangeburg, South Carolina, is paying Clarence Gailyard $650,000 after a now-terminated police officer stomped him out.

ABC News reports that the 58-year-old was walking with a stick wrapped in shiny tape on July 26 when someone mistook it for a gun. Upon arrival at the scene, Orangeburg Public Safety Officer David Lance Dukes ordered Gailyard to the ground.

When he didn’t initially lay down flat, Dukes responded by stomping Gailyard in the head and neck, causing his head to slam into the concrete. Dukes was fired two days later and charged with first-degree assault and battery.

Gailyard says he only moved slowly because of the pins and rods in his leg following a car accident while on a bicycle years ago. He says he was only carrying the stick to ward off any dogs that might’ve tried to attack him.

In addition to the settlement, Orangeburg officials also apologized to Gailyard and plan to review the police department’s use of force policies, The Charlotte Observer reports.

“When an officer falls short of these expectations and conducts themselves in ways unbecoming to their department and the City, that officer must and will be held accountable,” City Administrator Sidney Evering said.

Bamberg credited the city of Orangeburg for moving swiftly to bring justice for Gailyard. The police chief at the time of the arrest has since retired as the department’s interim chief reviews the department’s use of force policy.

The force also plans to form a citizens group that will oversee how officers treat people.