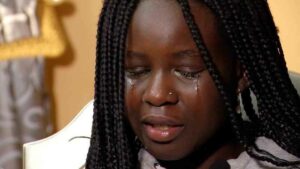 A Black high school student in Minneapolis was being bullied by a racist white girl and it was posted on social media and now officials at the high school have started an investigation into the incident.

According to KARE11, school officials at Prior Lake High School in Minneapolis are investigating a video that was posted by a white student where it shows her going on a racist rant trying to encourage a Black female classmate to take her own life.

After finding out about the video clip, Prior Lake High School’s principal, John Bezek released a statement saying that the “school does not tolerate racism or hate speech.”

“Racist messages like the ones in the video create an environment that is hostile to learning. Iwant to assure students and staff that we are committed to their safety and emotionalwell-being.”

Several hundred students assembled outside the high school to speak out against the racist video posted.

The identity of the teen has been revealed and she is 14-year-old Nya Sigin. A GoFundMe account has been set up for her college fund and has raised $113,755.

KSTP spoke to the 14-year-old girl about how she felt after viewing the video.

“When I first saw the video, I hadn’t really processed everything that was going on,’ she said. ‘I was hearing the words but yesterday I was in my counselor’s office, and I was really talking about it to them, and that’s when it all really hit me and how personal it was to me. That was just really hard because I just had this wave of emotions.”

Sigin also shared that she appreciates the support of friends and family.

“It’s just the most, like, immense feeling of the love from everybody that showed their support for me and my family,’ she said. ‘It’s just it’s honestly like an unexplainable feeling. I couldn’t even express how thankful I am for everybody.”

Random: Look, It's The Smash Bros. Director Masahiro Sakurai On A Horse