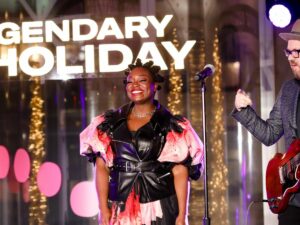 According to Freak Out Records, Shepherd’s “dynamic vocal combines the power of theater with the tender introspection of American folk music in a commitment to every song, story, and note being real, raw and present.”

Nordstrom commissioned the song as part of its Make Merry holiday campaign. It was released in November with Sub Pop records. This marks the first time that a tune accompanies Nordstrom’s always-anticipated holiday campaign. “We believe this music conveys the ease and calm of how Nordstrom can make you feel by taking care of you, appreciating you, helping to make you feel good,” stated a press release.

When describing her experience, Shepherd reminisces about what it was like during Christmas time at Nordstrom as a child. She shares, “In Seattle, they have this very epic and iconic set up every year, and I would go there just to see Santa Claus when I was visiting my mom.” As an adult, she became intrigued in buying nice things for herself. She said, “Nordstrom is where if I want to feel pretty and beautiful, I go get something special.”

Shepherd is committed to highlighting the power of music to inspire togetherness with this dynamic partnership with Nordstrom.

“I’m honored, and moreover, I feel galvanized,” she says. “I really want it [the song] to be successful. I want this to be a program that helps other artists like myself because Seattle’s a hard place to reach people, you know? It’s really these bigger voices, corporations, and companies that have great reach outside of the city. So for Nordstrom to work with me and see something in my art that they thinks aligns with their brand — I’m just looking forward for the next person to come up and do this work,” Shepherd stated.

The campaign will help fully fund resources for women of color like Sheperd to pursue their dreams in music.

All proceeds from the electrifying song will benefit Africatown Seattle and can be found on digital platforms.