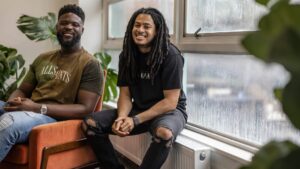 According to a report by Expand the venture, a nonprofit that supports Black and minority entrepreneurs, ethnic minorities in the UK received less than 2% of capital invested at all stages between 2009 and 2019. For Black founders, the amount is less than 1%.

To combat this, Black Seed raised $11 million (£10 million Euros) in a funding round, gaining support from several investors including Sole Crane and real estate managers Rick Lewis and Brent Hoverman, the chairman at Founder Factory.

The pair want to build a seed-funded portfolio of up to 30 Black-led startups across the UK within three years. The startups will have access to office space in Brixton where startups can provide additional support and access investors for support and mentorship.

Lutterodt and Lokko said when they started Black Seed, they kept hearing there was a “pipeline problem” and that not enough Black men and women are trying to start new businesses. But the two called it a myth.

Black Seed hosts monthly community events to being investors and creators together to find the best startups to recruit. Using these events Black Seed has already found several companies to invest in including Ruka Hair and Beautonomy. The group also supports other ventures including a female-led food delivery service for African-Caribbean cuisine and AI-powered family planning app.