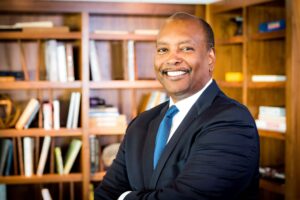 Silicon Valley CEO Eric Kelly has always been frustrated by the myth among corporate executives that finding Black talent in the tech industry is a challenge.

Kelly fortified the staff of his hybrid Cloud IT infrastructure firm with minority talent and told NBC News it wasn’t hard to do.

Kelly saw an opportunity to change the narrative and has created Bridge 2 Technologies (B2T), an online platform bridging the divide between corporate America, minority talent and minority-owned businesses. The platform is designed to make Black and minority talent accessible to corporations and connect Black-owned businesses with large corporations.

The platform, which launched last Friday, will also help young employees entering the workforce connect with experienced employees for mentorship opportunities. The platform will also show small business owners how to raise capital and make valuations of their companies.

“B2T understands that despite well-meaning intentions,” Kelly said, “the right tools and technology have not existed to support diverse talent, find opportunities with companies that value economic inclusion and equality — until now.”

It’s no secret that minority talent in the tech industry is lacking. Girls Who Code CEO Tarika Barrett said at an Axios virtual event Tuesday that diversity in tech is badly needed.

“We need to empower a pipeline of young people and girls of color to pursue the tech careers of the future,” Barrett told Axios. “We always say that you can’t be what you can’t see.”

Additionally, Fast Company reported that a lack of diversity is a significant reason behind the Great Resignation in the tech industry. According to MarketWatch, less than 10% of workers at Google, Facebook and Uber last year were Black.

“Over the last 30 years, the diversity as it relates to Black professionals in technology and the workforce in general has been lacking, to say the least,” Kelly said. “If we are serious about closing this gap, technology has to be at the forefront.”

Kelly added B2T’s main goals are to build economic equity, create a pipeline of minority workers and companies to connect with organizations across the globe and provide mentors and sponsors for young professionals entering the workforce to come too.

Google, Facebook and Amazon have all made pledges to boost diversity and donate money to create or  benefit diversity programs in tech in the aftermath of the Black Lives Matter movement and the death of George Floyd.