American firm Salmela Architect has created a Minnesota home for a physicist and an eye doctor that is meant to resemble a “scientific instrument with multiple viewing apertures”.

The Feldmann Residence is located in Wayzata, a suburban community near Minneapolis. The dwelling stands out in its neighbourhood, which is dotted with expansive homes, many of them traditional in style.

“It sits in stark contrast to the neighbouring architecture of the semi-wooded, suburban location – in its purist abstraction, its abnormally narrow profile, and its relatively modest size,” said local firm Salmela Architect.

Built for a physicist, an eye surgeon and their two children, the home is infused with references to the owners’ professions and personalities.

Rectangular in plan, the two-storey residence lies on an east-west axis and consists of a long, slender bar and a detached garage. A paved area runs between the two structures.

Facades are covered in black stucco that looks velvety during the day. By night, the dark cladding helps the building disappear into its setting.

“From a distance, the house appears as a black mass with suspended appendages – or a scientific instrument with multiple viewing apertures,” the team said.

Emerging from the roof are two pyramid-shaped volumes with skylights.

On the north elevation, a small glazed box – which holds an office – juts out from the upper level and projects toward a lake.

On the south, a large box wrapped in cedar slats extends from the upper level and appears as “a telescoping volume of horizontal lines”. This protrusion serves as a screened porch and also helps shade the lower level.

Inside, the home features wooden finishes, contemporary decor and bright rooms. A key component of the interior are the skylights, which bring daylight down into the core of the home.

“This relationship is slowly inverted throughout the day, with a uniform equilibrium achieved at noon.” 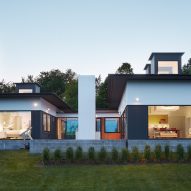 In terms of programme, there is a clear delineation between public and private spaces.

On the ground floor, the east end holds the kitchen and dining room, while utility spaces are found on the west.

In the centre is a double-height living room with a masonry fireplace. A chimney rises 35 feet (11 metres) through an opening in the floor above. Similar chimneys were created for two outdoor terraces.

Located on the upper story are the sleeping areas. To one side is the parents’ suite, and to the other is a pair of children’s bedrooms.

In the central area is a family room and openings to the floor below, along with access to the screened porch and office.

“The long, screen porch connects the two halves and functions as an extension of the indoor family room,” the team said.

“A small, private office provides a place of quiet work, study, or contemplation, with tranquil views of a tree and the lake beyond.”

Salmela Architect was founded in 1994 and is well known for buildings designed in a regional modernist style. Other projects by the studio include a retreat in a Wisconsin forest and a solar-powered house that was created for an architecture professor.

The photography is by Corey Gaffer.