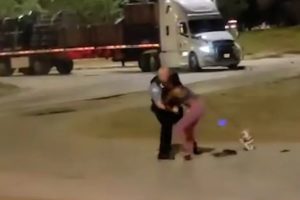 A Black Chicago woman’s police encounter went viral on Sunday after a video showed an unidentified officer grabbing her and attempting to tackle her to the ground.

The woman, identified as Nikkita Brown, called 911 to report that she was racially profiled on Saturday while walking her dog in Lincoln Park’s lakefront, CBS News reports. Brown was walking her dog when the officer approached her and told her she was on the beach after hours.

Despite there being others, who were white, on the beach at the time, her attorneys from Saulter Law P.C. say the officer approached her because the beach closes at 11 p.m.

In the video, Brown can be heard asking the officer to step back because of COVID. “Please respect my face. It’s COVID. Six feet,” she said. But the officer told her they were outdoors and proceeded to try and handcuff her.

Bystander video shows Brown screaming while the officer attempts to tackle her while grabbing her arms and knocking her phone out of her hands. After engaging in a scuffle, the officer can be seen letting Brown go and walking away.

Her attorneys called the attack an “obvious case of racial profiling” that resulted in “emotional trauma” because of the “brutal, unprovoked and unlawful attack.”

On Sunday, Chicago police announced that an investigation is underway, Fox 32 reports.

“CPD is aware of a video circulating on social media regarding an incident involving a Chicago Police officer and a woman walking her dog at North Avenue Beach,” the police said in a tweet. CPD promptly referred the matter to @ChicagoCOPA when we became aware of the incident.”

Chicago Mayor Lori Lightfoot said she was “deeply concerned” by the video footage.