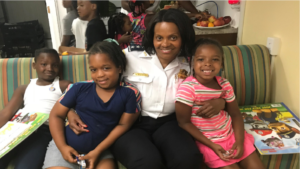 The Washington D.C. Metro Police Department’s assistant police chief said as an 18-year-old cadet, she was told to get an abortion or be fired.

Chanel Dickerson is one of 10 current and former Black female police officers suing the D.C. Metro Police, claiming racial and gender discrimination. In their 250-page complaint, the 10 women say they were discriminated against and the division in charge of addressing such issues was run by a man who has repeatedly expressed hostility toward female officers and colluded with management to discredit women who come forward.

“My choice to have a baby was personal and it should’ve been mine alone and not for an employer ultimatum,” Dickerson said during a community meeting, according to NBC News.

The Hill reported Karen Arikpo, who was in the same training class with Dickerson in 1997, said her female sergeant gave Arikpo and the rest of the class the same ultimatum Dickerson was given.

“So later that day, I went and told my class sergeant that I was pregnant. And she said I needed to have an abortion and she referred me to a doctor in D.C. to get it done,” Arikpo added.

Arikpo told Fox 5 DC she thought she would take her experience to the grave, but she was motivated to come forward when she heard Dickerson’s story. Both women went on to have long careers with the D.C. Metro police. Dickerson has been on the force since 1988, and Arikpo has served 24 years for the D.C. Metro police.

Arikpo added if she could turn back time, she would’ve quit the force and had her child. Arikpo said she has spent years trying to have a child but has been unable.

The women have come together to file a class-action suit against the department.

“They come together as a class here to describe how the MPD has, for decades, treated Black women police officers with contempt, to the point of systematic psychological abuse,” the lawsuit states. “As is often the case, the abuse is often not visible by looking at one person, or one incident.”