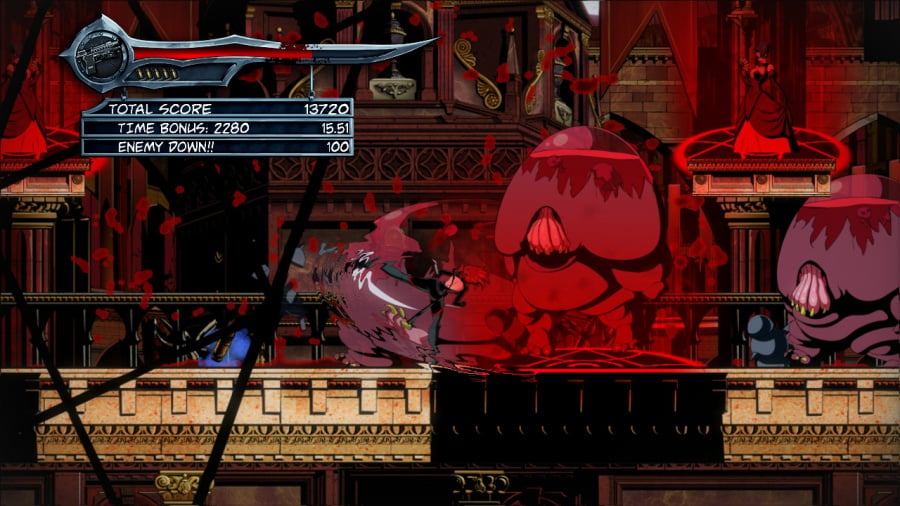 The customer is always right, so the saying goes. But when BloodRayne Betrayal: Fresh Bites presents to you its wares, it’s not quite ready to concede that much. If the customer thinks there’s actually a few too many monsters on screen, well, they’re wrong. If they think those platforms are a bit too narrow, that’s also incorrect. You can by all means offer an opinion about checkpoint spacing, but it will be ignored. BloodRayne may not provide the friendliest customer service, but you will definitely get served.

This is the core of the BloodRayne Betrayal: Fresh Bites proposition: a vampiric, cartoon-gory, 2D, side-scrolling platform slash-em-up, refreshed from 2011, that’s old-school in genre, style and aesthetic. It’s also old-school in what it demands of the player and in how it treats you when its demands are not met.

The scenario is part of the extended lore of the BloodRayne media franchise, which grew from the first game in 2002 into a movie, comics and more games. If that’s not your bag, then it won’t affect your enjoyment of Betrayal. Taken purely as vampire schlock with cheesy gothic evildoers, the setup does all that’s required to get you into the action. For those following along, there are the added voice talents of Laura Bailey and Troy Baker for this Fresh Bites release, bringing the characters to life – or undeath if that’s more accurate. 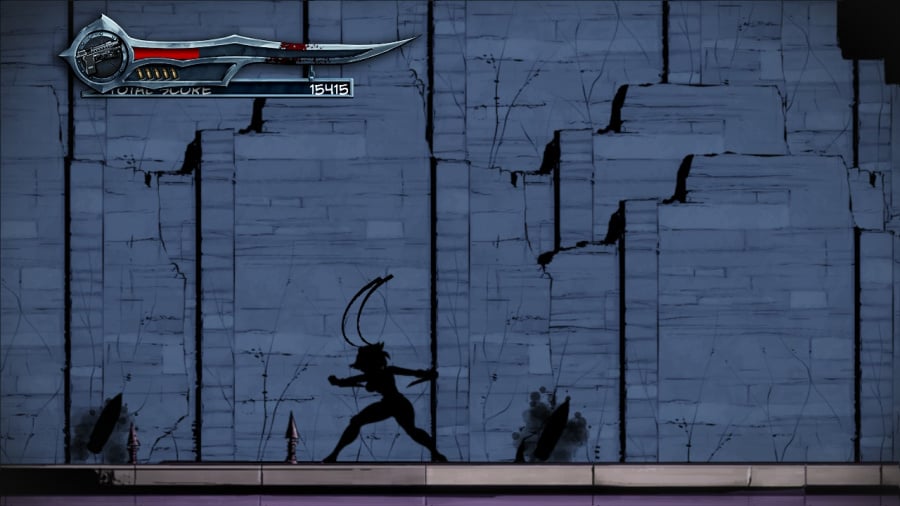 Rayne, the half-human dhampir and star of the show, has a substantial moveset of slashing, jumping, dashing, shooting, more slashing, infecting, wall kicking, blood-sucking, slashing again, exploding, launching, combo-ing, stamping, decapitating and a bit more slashing to make sure. These tag together with complexity and creativity to make an absolute bloodbath of the screen.

Enemies somersault in from the foreground, hatch from sacs on the ceiling, leer from behind the deep parallax backdrops and just generally pop up round and about the place ready for a slashing. You can practically fly indefinitely by chaining aerial hits across the hordes. Racking up the points as you clear your path is a buzz – as is the amusingly extended pause in the action as you suck a neck completely dry to regain some health.

This whirlwind blade-whizzing is set out like a dynamic comic book, with the action growing to fill the frame in red, gloopy, balletic detail, all characters silhouetted against moonlight as river rapids of blood churn across the screen. The play feels visceral, kinetic and sensual; it sounds confident and charismatic against soft classical piano or rock-metal guitar. Rayne is a character just made to slice across screens of baddies with flamboyant swoops. 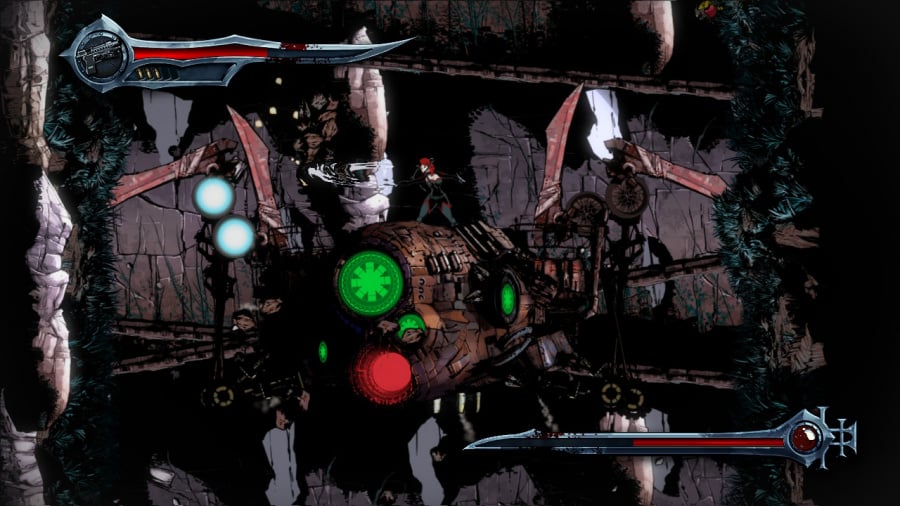 Which is where a problem comes in. Rayne is indeed made for whizzing and slashing – both words for weeing but that’s not what we mean – she’s made for that, but she’s then asked to do a bit of platforming on the side. More than a bit, actually, and it can be infuriating. There is a standard platform height that is just higher than Rayne’s jump. It’s perfect during a battle because it creates a layer of action that you won’t move to without intentionally doing a higher flip jump, but for platforming it’s a little mindboggling. It’s like the world has been built specifically not to be climbed on, and yet that’s what you’re asked to do.

Another common platform type – a moving one, no less! – is about the size of a kneecap. Rayne’s stance is so wide that she can comfortably place her feet either side of the target and rest “on” it while floating in mid air. In fact, that’s almost the only way to do it. Enemies and their corpses also regularly overhang ledges, balancing horizontally by just one toe, like a sheet-covered lady in a Victorian magic act.

Finally, the scenery does not do well to signal what is a floor and what is a hole; what is a spike and what is a wall; or what is a blocked path and what is an open corridor. Put all that together and you can get a sequence like this: cross checkpoint, kill several waves of bad guys, traverse excruciating platforming section, reach the end on attempt 200 but misread where the floor is, ow, acid, commence attempt 201 from back at the checkpoint, which was before the waves of enemies, not even at the start of the platforming… 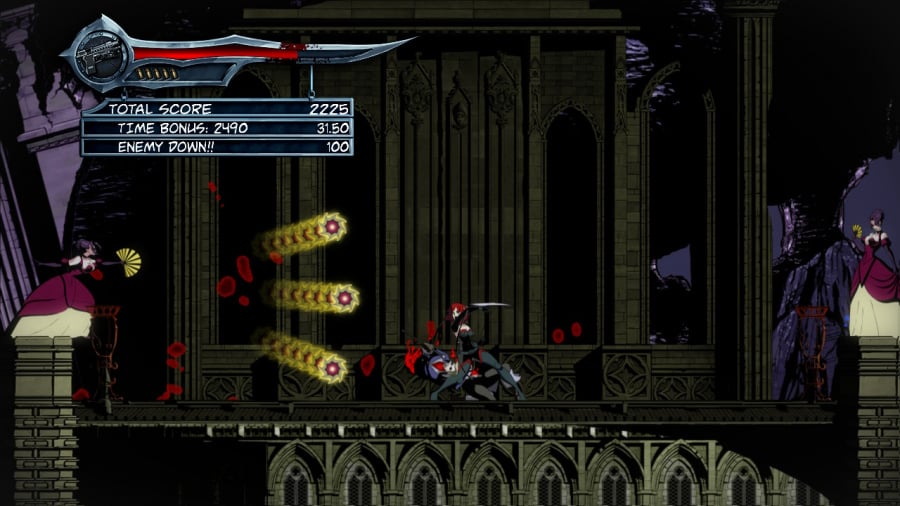 There are flashes of potential in BloodRayne Betrayal: Fresh Bites’ platforming. When you’re permitted to find a rhythm and it plays to the strengths of Rayne’s killer moveset, it’s thrilling. But they are rare. It’s the boring, artless, unfair sections you’re repeating ad infinitum.

WayForward told Nintendo Life they’d sought to identify “features and additions that had good ‘bang for the buck’” when remastering BloodRayne Betrayal. The “standard” and “classic” difficulty settings are a great example – rebalancing damage and health values to let more casual players enjoy the combat while keeping the skill ceiling very high. Addressing the platforming issues would have provided a lot more bang, but presumably at considerable extra buck. It’s testament to the quality on show in other areas — the inventive combat, the gorgeous visuals, the fantastic audio — that we left satisfied with the experience.

The customer is always right, so the saying goes, and as customers of this game, players can have some legitimate complaints about the service. The platforming is not fun: sadistic design choices are realised with lacklustre materials. But BloodRayne doesn’t care. The combat, when you’re allowed to play it, is unique and raucous and deliciously convoluted, with a skill ceiling as high as a gothic cathedral. BloodRayne isn’t here to take your order; it’s here to suck your blood.

‘I Can’t Hear You Over My 7 Olympic Medals’