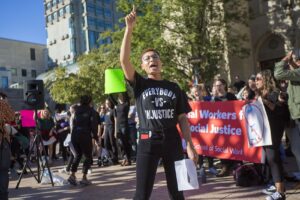 Editors for Boston University’s independent student newspaper are calling for the school’s campus police to be “outright” abolished due to it’s “egregious history and present of violence and racism.

In a new opinion piece published Dec. 8, the student staff of the Daily Free Press cited six separate instances during which the department came under scrutiny due to violence or racial profiling. The incidents range from 1972 to October 2021.

The oldest episode noted in the op-ed involved a Black high school student named George Stone who worked at the BU cafeteria. He was attempting to enter the space for work, when he was assaulted by Boston University Police officers and arrested for trespassing.

The overarching sentiment expressed by the opinion piece is that the presence of the BUPD and campus security isn’t actually keeping students safe.

“[The] safety issue has nothing to do with a lack of campus security forces — Boston University Police and BU security staff — are distributed throughout our campus,” the students write. “Rather, our safety issue has more to do with the fact that these campus security forces — both explicitly and implicitly — are not designed, or willing, to protect the safety of all BU students.”

The article states that it echoes demands made by other student groups. What the Daily Free Press and other student organizations are calling for is, at the very least, to have resources diverted from the campus police force in favor of programs that could do a better job of keeping students safe.

“For instance, BU could increase funding for Scarlet SafeWalk, a program in which students escort anyone feeling unsafe to their home,” the editors offer. “BU could create a mental health task force specifically designed to deal with mental health crises and expand funding and resources for BU’s Sexual Assault Response and Prevention Center.”

According to the Daily Mail, in 2020 BU president Robert Brown announced that the school had created a community safety advisory board to help train officers on avoiding unconscious bias and policing in a nondiscriminatory manner.